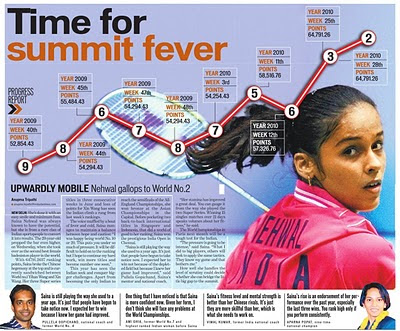 Anupma Tripathi, Hindustan Times
She’s done it with an easy smile and minimum fuss. Saina Nehwal was always known to have the potential, but she is from a rare clan of Indian sportspeople to convert it into results. The 20-year-old propped the bar even higher, on Wednesday, when she took over as the second best female badminton player in the world.
With 64791.2637 ranking points, Saina broke the Chinese hegemony at the top and is currently sandwiched between World no.1 Yihan Wang and Xin Wang. Her three Super series titles in three consecutive weeks in June and loss of points for Xin Wang has seen the Indian climb a rung from last week’s rankings.
The voice muffled by a bout of fever and cold, Saina manages to maintain a balance between hope and caution: “I was happy being world No. 10 or 20. This puts you under so much of pressure. It will be difficult to hold on to the ranking but I hope to continue my hard work, win more titles and become number one soon.”
This year has seen the Indian seek and conquer bigger challenges. Apart from becoming the only Indian to reach the semifinals of the All-England Championships, she won bronze at the Asian Championships in the Capital.
Before pocketing two back-to-back international titles in Singapore and Indonesia, that did a world of good to her ranking, Saina won the prestigious India Open in Chennai.
“Saina is still playing the way she used to a year ago. It’s just that people have begun to take notice now. I expected her to win not because of the depleted field but because I knew her game had improved,” said Pullela Gopichand, Saina’s mentor and national coach.
“Her stamina has improved a great deal. You can gauge it from the way she played the two Super Series. Winning 15 singles matches over 21 days speaks volumes about her fitness,” he said.
The World hampionships in Paris next month will be a tough test for the Indian.
“The pressure is going to be intense,” said Saina. “What I did to big players, others will look to apply the same tactics. They know my game and that bothers me.”
How well she handles the level of scrutiny could decide whether she can bridge the little big gap to the summit.