Officials stay in denial, but start repairs
A day after Hindustan Times exposed the dilapidated state to which the Commonwealth Games shooting range at Kadarpur had been reduced to by a few spells of rain, sports ministry officials remained officially in denial, even as they embarked on damage control. On Monday, workers swarmed the shooting range, trying to repair the damage. Yet a senior ministry official told HT, "No major structural damage has taken place. The embankments have been washed away but this is normal during the rainy season."
"There is no structural damage at Kadarpur. All venues are of international standard and the country will face no embarrassment," Rahul Bhatnagar, joint secretary in the sports ministry, said.
The Central Public Works Department sent its own denial to HT with chief engineer S M Amrit claiming the shooting range was "in sound condition, and if required, games can be held there even today."
Repair work at other venues referred to in the report was restarted as well. Closer scrutiny was not possible, as security around most venues had been tightened following the report.


Stadium gets facelift even as CPWD refutes HT report
A day after HT published an article outlining shortcomings at the Dr SP Mukherjee Swimming Complex that was inaugurated on Sunday, the official machinery took a defensive stance on Monday. A strongly-worded letter from the director-general, Commonwealth Games Projects (CPWD), S S Mondal, questioned
the authenticity of the report and accompanying photos taken by staff photographer Arijit Sen. Photos showing the venue spic and span accompanied the letter. The official machinery, it seems, has worked overtime to clean up the mess in the last 24 hours. HT stands by its report and photographs, which were taken on the day of the inauguration. 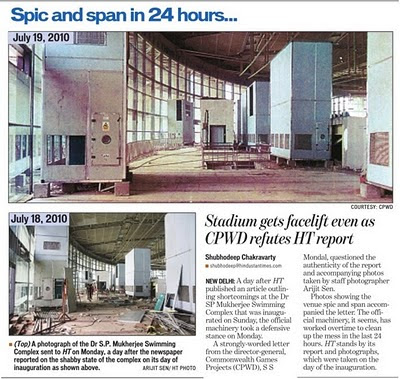 Posted by tony mariadass at 9:57 AM