Detractors of CWG or Realists?

New Delhi:  Congress leader Mani Shankar Aiyar has said that he will be unhappy if the Commonwealth Games are a success. He also added that anyone who's patronising the Games cannot be anything but evil. His analysis elicited caustic reactions from his own party, the BJP, and Suresh Kalmadi, the man in charge of organizing the Games in India.
On a cloudy day with rain showers in many parts of Delhi, Aiyar offered, "I am delighted in a way because rains are causing difficulties for the Commonwealth Games. Basically, I will be very unhappy, if the Games are successful because then they will start bringing Asian Games, Olympic Games."
Aiyar who has in the past served as the country's Sports Minister, has been a vocal critic of the Games. "Those who are patronising the Games can only be evil. They cannot be God," he said. 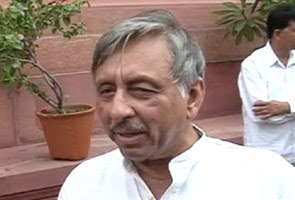 View Mani Shankar Aiyar's interview by NDTV here
By (job) definition, Kalmadi is a part of that axis of evil in Aiyar's world-view. He struck back with, "If Aiyar had been Sports Minister, no stadia would have been ready."
Kalmadi is, however, on somewhat thin ground. Each day brings new reports of venues being flooded. Some stadia have needed major renovation during the monsoon season, just weeks after they were declared ready for the Games.
Aiyar said the whopping expenditure- at 35,000 crores, these are reported to be the most expensive Commonwealth Games ever  - is a matter of shame.
"Just imagine if we would have spent the Rs.35,000 crore in providing training to the children, we would have won medals in every international sporting event," Aiyar added.
The Congress was quick to dismiss Aiyar's comments.
"I do not take him seriously," said Congress MP Sandeep Dikshit, whose mother, Sheila, is the Chief Minister of Delhi and therefore has considerable prestige at stake with the Games.
The BJP, which has also raised questions about the preparations and the manner in which funds were being used, said irresponsible statements are best-avoided.
"The Central and state government should understand that prestige of the country is associated with the Commonwealth Games," declared BJP spokesperson Ravi Shankar Prasad.

Read more at: http://www.ndtv.com/article/sports/hope-commonwealth-games-flop-says-mani-shankar-40121?cp
Posted by tony mariadass at 7:00 PM