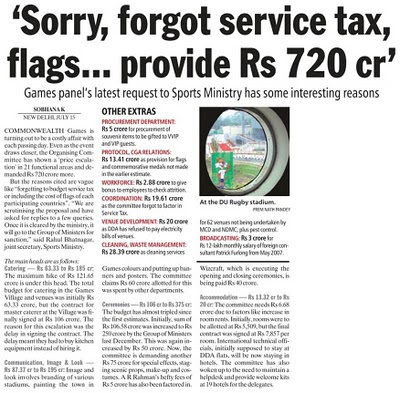 Sobhana K – The Indian Express
New Delhi:
Commonwealth Games is turning out to be a costly affair with each passing day. Even as the event draws closer, the Organising Committee has shown a ‘price escalation’ in 21 functional areas and demanded Rs 720 crore more.
But the reasons cited are vague like “forgetting to budget service tax or including the cost of flags of each participating countries”. “We are scrutinising the proposal and have asked for replies to a few queries. Once it is cleared by the ministry, it will go to the Group of Ministers for sanction,” said Rahul Bhatnagar, joint secretary, Sports Ministry.
The main heads are as follows:
Catering — Rs 63.33 to Rs 185 cr: The maximum hike of Rs 121.65 crore is under this head. The total budget for catering in the Games Village and venues was initially Rs 63.33 crore, but the contract for master caterer at the Village was finally signed at Rs 106 crore. The reason for this escalation was the delay in signing the contract. The delay meant they had to buy kitchen equipment instead of hiring it.
Communication, Image & Look — Rs 87.37 cr to Rs 195 cr: Image and look involves branding of various stadiums, painting the town in Games colours and putting up banners and posters. The committee claims Rs 60 crore allotted for this was spent by other departments.
Ceremonies — Rs 106 cr to Rs 375 cr: The budget has almost tripled since the first estimates. Initially, sum of Rs 106.58 crore was increased to Rs 250 crore by the Group of Ministers last December. This was again increased by Rs 50 crore. Now, the committee is demanding another Rs 75 crore for special effects, staging scenic props, make-up and costumes. A R Rahman’s hefty fees of Rs 5 crore has also been factored in. Wizcraft, which is executing the opening and closing ceremonies, is being paid Rs 40 crore.
Accommodation — Rs 13.32 cr to Rs 20 cr: The committee needs Rs 6.68 crore due to factors like increase in room rents. Initially, rooms were to be allotted at Rs 5,509, but the final contract was signed at Rs 7,857 per room. International technical officials, initially supposed to stay at DDA flats, will be now staying in hotels. The committee has also woken up to the need to maintain a helpdesk and provide welcome kits at 19 hotels for the delegates.
OTHER EXTRAS
PROCUREMENT DEPARTMENT: Rs 5 crore for procurement of souvenir items to be gifted to VVIP and VIP guests.
PROTOCOL, CGA RELATIONS: Rs 13.41 crore as provision for flags and commemorative medals not made in the earlier estimate.
WORKFORCE: Rs 2.88 crore to give bonus to employees to check attrition.
COORDINATION: Rs 19.61 crore as the committee forgot to factor in Service Tax.
VENUE DEVELOPMENT: Rs 20 crore as DDA has refused to pay electricity bills of venues.
CLEANING, WASTE MANAGEMENT: Rs 28.39 crore as cleaning services for 62 venues not being undertaken by MCD and NDMC; plus pest control.
BROADCASTING: Rs 3 crore for Rs 12-lakh monthly salary of foreign consultant Patrick Furlong from May 2007.
Who will foot the branding bill?
The tussle between the Delhi government and Commonwealth Games Organising Committee over who will foot the bill for dressing up the city during the Games fortnight is still on. While the committee claims that beyond the peripheries of stadiums it is the Delhi government’s responsibility, the government wants the organisers to pick up the tab. The OC claims they are paying for the branding activities inside each venue, the Games Village and hotels and are already running short of money.
But the government has its counter ready. “If the government will pay for everything then why does the OC need a budget? We have already spent Rs 12,000 crore on infrastructure. And why is the OC informing us about this expenditure at the last moment?” asked a senior official. Sources said Chief Minister Sheila Dikshit has put her foot down and insisted that the the budget has to be rationalised and they cannot be paid a lump sum.
A multi-agency committee, including the DTC, DMRC, MCD and NDMC, has now been set up under Principal Secretary Rina Ray. Each agency will pay for ‘Commonwealth branding’ themselves and their budgets will be discussed separately. The committee has agreed to provide the expertise as well as items required for branding. ENS
Posted by tony mariadass at 9:41 PM