Nothing seems to go right for Indian sports

One controversy after another is rocking Indian sports and its administration before showcasing the Delhi 2010 Commonwealth Games in October.
From the Government trying to impose age limits for sports administrators to Commonwealth Games woes of getting venues ready in time, venues which are ready giving way because of heavy rain, accelerating cost to host the Games, exorbitant cost for opening ceremony (View here), short of funds and the fears that the city's new infrastructure  not being ready in time for the Games have been hitting the headlines for the past two months.
Headlines like "Looting Common Wealth and Common Waste" have been hitting the streets.
But yesterday another shocker shook Indian sports with allegations of sexual harassment by Indian women hockey coach M K Kaushik.
The Delhi 2010 Commonwealth Games headquarters entrance was packed the media (print and electronic) personnel from morning to evening to interview Kaushik who had an appointment at the headquarters and other high ranking sports officials.
It is certainly the last thing the sports in India needed with just 73 days left before the Games.
It is indeed trying times for the Delhi 2010 Commonwealth Games Organising Committee as they are putting all efforts to make the Games the "Best Games Ever".
Will there be a silver lining after all these dark clouds and have the last laugh, or plunge into further controversies, only time can tell.
But India certainly does not deserve this after having successfully won the bid to become the second Asian country to host the Games after Malaysian in 1998, and hopefully things will be put right before the Games. Or is it wishful thinking!

I'll be exonerated but do not want to continue: Kaushik 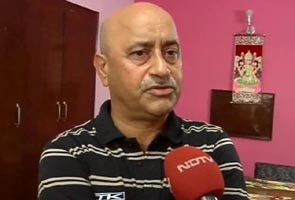 New Delhi:  Rattled by allegations of sexual harassment, the Indian women's hockey coach M K Kaushik on Wednesday has resigned and Hockey India has sacked videographer Basavraj whose photographs with a prostitute plunged the game into a moral crisis.
Kaushik announced his resignation after a meeting with a four-member inquiry panel comprising Rajiv Mehta (chairman) and former players Zafar Iqbal, Ajit Pal Singh and Sudharsan Pathak.
"I have said what I had to in front of the committee. I'm likely to be exonerated, but I have said that I no longer want to be the coach of the team", Kaushik said.
Former India skipper Zafar Iqbal said there may not be enough evidence since it is a case of one player's word against the coach. "I have spoken with the captain and I asked if he (Kaushik) had ever touched her, she replied to me saying no", he said.
The inquiry committee probing the sex scandal in women's hockey will submit its report to Sports Authority of India on Friday.
Earlier, the ugly scandal broke out when a member of the Indian women's hockey team sent in a written complaint of sexual harassment against national coach MK Kaushik.
In an unrelated development, the video analyst of the team Mr Basavaraja, has been suspended. That after an anonymous person sent Hockey India photos of Basavaraja with a prostitute.
The pictures were reportedly taken during the team's recent trip to China.
Hockey India Secretary General Narinder Batra had earlier spoken on the issue saying that he had received the mail a few days back containing the complaint and the pictures.
Batra said he received an anonymous mail last Friday, in which allegations had been levelled against Basavraj for having been involved with prostitutes during the tours of Canada and China.
He said five photographs of the videographer with the prostitutes had also been mailed to him. Batra said the Sport Ministry has been apprised of the complaints.
"The inquiry committee was constituted soon after I got a mail from the hockey team. After a meeting on July 19, it was decided that the videographer should be suspended and the rest of staff against whom the allegations have been made should be issued notices," he said.
"The videographer is basically a SAI employee and it is upto them now, how they want to act against him. On our part we have sacked him," Batra said.

It's a conspiracy against me: Kaushik   Press Trust of India
New Delhi:  Stunned by allegations of sexual harassment against him, Indian women's hockey coach M K Kaushik on Wednesday said the scandal is a conspiracy hatched by players who failed to get a place in the national side.

"This is a big-time conspiracy against me with many hands behind it. Those who failed to earn a place in the national team have come out with such a cheap act," Kaushik said.

Kaushik has withdrawn from the Asian Champions Trophy in South Korea from July 27, insisting that it was his moral duty to step aside until proven innocent.

"I will prove my innocence. I can't believe that one can go to such an extent to level charges against me," he said.

Indian Hockey yesterday plunged into a moral crisis after a member of the women's team sent a written complaint to the federation officials alleging sexual harassment by videographer Basavraj and a member of coaching staff.
Hockey India has sacked the videographer after photographs of him with a prostitute during March-April China Tour surfaced in the media.
A four-member inquiry committee has been formed to look into the sex scandal. The committee comprises Rajiv Mehta (chairman), former players Zafar Iqbal and Ajit Pal Singh and Sudharsan Pathak.
Kaushik said the allegations against him are baseless and he is confident of coming out of the crisis clean.
"With my name associated with this scandal, how can I go to the stadium with the team? No question arises of me accompanying the team to South Korea. I am not in the position to lead the side there and work with mental peace," said Kaushik, who had mentored the side to the 2002 Manchester Commonwealth Games gold medal triumph.
Kaushik said the allegation has sullied his 20-year-old father-like image in the team as he never thought players would go to such an extent to fulfill their vested interests.
"Go and ask the players, why they have done so? I have always maintained that those players who will play to their fullest will remain in the team. Your performance will ultimately be counted and help in cementing your place in the side.
"In the last 20 years as women's hockey team coach, no one pointed a finger towards my integrity. My players have always treated me like a father-figure. It's difficult to understand what prompted them to come out with such false charges against me," Kaushik wondered.
Kaushik said he has not spoken to any of the players over phone after the scandal broke out yesterday and will continue to maintain silence until proven innocent.
"What is left for me to speak about? Truth will come out soon and I will treat this incident as an eye-opener for me. I'll urge the media to go and ask these players why they have done it?
Kaushik's contract as will expire in November this year after the Asian Games in China.
Sex scandal rocks Indian Hockey
HT Correspondent, Hindustan Times
Hockey India has set up a four-member committee to probe an alleged sex scandal involving members of the support staff of the Indian women's hockey team during the recent exposure tours of China and Canada. The committee, comprising Rajeev Mehta, member of HI executive board, former captains and government observers Ajit Pal Singh and Zafar Iqbal and Sudarshan Pathak, member of Delhi Hockey, has been asked to probe allegations of sexual misconduct included in an anonymous email sent to HI three days ago, exposing the scandal and seeking action against the chief coach and the support staff. A copy of the said mail is with HT. The mail alleges a videographer with the team on the China and Canada tour of bringing girls to his hotel room and also includes some photographs of a person, alleged to be the said videographer, in a compromising position.
The mail also accuses another member of the support staff of seeking favours from the players.
A meeting of the committee was held on Monday while another is scheduled on Wednesday.
Zafar Iqbal has been made convener of the inquiry committee, HI secretary-general Narinder Batra told HT over phone from Delhi.
When contacted, Ajit Pal Singh, refused to give any information as a "committee has already been constituted for the purpose".
Meanwhile, RK Naidu, in-charge director of SAI Centre, Bhopal, said the team had left for Delhi on Tuesday morning to take part in the Women's Asian Champions Trophy scheduled in Busan, from July 27 to 31.

Read more at: http://www.ndtv.com/article/sports/hockey-sex-scandal-coach-kaushik-resigns-38771?cp
Posted by tony mariadass at 2:04 AM