Saina on top of the world

Saina Nehwal to receive Khel Ratna this year
(India Today)
Saina Nehwal will be the winner of this year's Rajiv Gandhi Khel Ratna, India's highest sporting honour.
The 20-year-old shuttler from Hyderabad has had a phenomenal run in the last couple of years, and worked steadily towards becoming the world No. 2 in a sport monopolised by the Chinese.
An Arjuna Award winner in 2009, Saina will receive the Khel Ratna from President Pratibha Patil on August 29, the National Sports Day. The award consists of a cash amount of Rs 7.5 lakh, a scroll of honour and medal.
"I am really happy. It's unbelievable, a dream come true for me to get another within one year. National awards gives you a lot of motivation and it definitely has inspired me to achieve bigger glories for my country," Saina said. 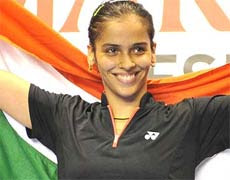 "I have done well in the last two years and the three titles that I won recently have really boosted my confidence. I am now preparing for the World Championship and I hope to win the title," she added.
Saina is also one of the six brand ambassador for the Commonwealth Games 2010.
National coach and her mentor Pullela Gopichand also heaped praise on his protege and said it is the result of her hard work that she achieved the award.
"Its really a great news. She deserves the award. She had a fantastic last two years and she has put a lot of hard work and the sort of belief she has in herself, I'm confident she will achieve much more in her career," Gopichand said.
Gopichand said next month's World badminton Championship will be a test for Saina as it would decide if she can reach the numero uno status.
"She is world number two now and the number one status will depend on her feat in the World Championship because, the other two important tournaments likw Commonwealth Games and Asian Games unfortunately doesn't count in ranking," he said.
Last year, the Khel Ratna award was given jointly to the trio of Olympic bronze medallist boxer Vijender Singh, wrestler Sushil Kumar and four-time World champion woman pugilist MC Mary Kom.
Saina has recently completed a hat-trick of major titles, winning the Indian Open, followed by Super Series titles in Singapore and Indonesia.
Earlier this year, she became the first Indian woman to reach the semi-finals of the All-England Super Series. The Super Series tournaments are considered badminton's equivalent of a Grand Slam in tennis.
In 2009, the Hyderabadi had won the Indonesian Super Series, the first Indian to do so.
(With PTI inputs)
Posted by tony mariadass at 9:32 AM