NEW DELHI, 5 July 2010: Organising Committee Commonwealth Games 2010 Delhi today reassured High Commissioners of Commonwealth nations that things were well on track to host athletes and officials from their nations, offer them the opportunity to stay and perform in world class facilities – and in a safe and secure environment.
“The athlete is the centre of attention and everything that goes into the making of the Games has been designed with this in mind,” Organising Committee Chairman Mr. Suresh Kalmadi, MP, told the High Commissioners during an interaction at its headquarters here on Monday. “We also want to leverage the Commonwealth Games 2010 to help promote India’s economic potential and attract greater economic co-operation from the Commonwealth nations and territories. 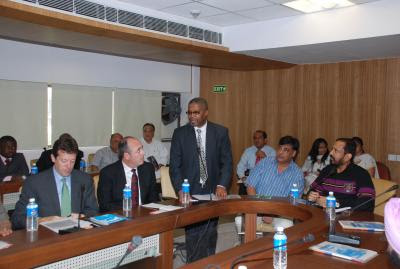 In Conference......Suresh Kalmadi (right) and Commonwealth Games 2010 Delhi Organising Committee secretary-general Dr Lalit Banot (beside Kalmadi)
“I seek your co-operation in helping the Commonwealth Games 2010 Delhi be a resounding success,” he told the High Commissioners. “I look forward to your using your good offices to help us make this a memorable Games by ensuring that the best athletes represent your nations in the Commonwealth Games.
“I am also confident of your support in encouraging high-power business delegations come and participate in the Games and the number of business seminars we have planned. It is our endeavour to create a networking environment for business leaders of the Commonwealth and our partnership with CII and FICCI will go a long way in ensuring that our objectives are met,” Mr. Kalmadi said.
Mr. Kalmadi quoted Australian Commonwealth Games Association CEO, Mr. Perry Crosswhite that “these Games have the potential to be better than the Melbourne Games.” He thanked the Commonwealth Games Associations for showing their enthusiasm by confirming the participation of a large number of athletes and officials. He made special mention of Australia, England and Wales which are sending the largest ever contingent for the Games. Mr. Kalmadi said that all venues are world class and would be completed well in time.
He spoke of the Business Club India, which held road shows in all continents along with the Queen’s Baton Relay 2010, as a major part of the attempt to showcase the seamless synergy between modern sport and business. “BCI has projected India’s image and attracted co-operation in key areas like information technology, pharmaceuticals, manufacturing, higher education, skills, environment, advance and high technologies.”
Mr. Kalmadi said the Organising Committee Commonwealth Games 2010 Delhi has on board a number of consultants from overseas who bring in rich expertise in a variety of fields. “Together with a huge team of trained personnel to take care of the protocol and hospitality, we will ensure that your athletes and officials are at home here, experiencing the famed Indian hospitality,” he said.
Representatives, including High Commissioners, Deputy High Commissioners and trade delegates from various Commonwealth nations attended the meeting. South Africa, UK, Australia, Mauritius, Kenya, Jamaica, Singapore, Mozambique, Sri Lanka, New Zealand, Bangladesh, Gambia, Zambia, Bahamas and Malaysia were some of the nations that were represented. The delegates expressed satisfaction over the progress made by the Organising Committee Commonwealth Games 2010 Delhi (OC CWG Delhi 2010).
Posted by tony mariadass at 5:22 PM

Holding the 10-day, Rs 20,000 crore-jamboree reflects a misplaced sense of pride and distortion of national priorities. If not on development of a chronically poor nation, the money could have been well spent on bringing basic sports to every mohalla and panchayat------------
http://unbearableindia.wordpress.com/2010/07/07/why-the-commonwealth-games-in-delhi-are-a-tragic-joke/