Pictures do not lie!

On camera: Crumbling CWG stadiums
Getting the 2010 Commonwealth Games stadia ready in time increasingly appears to be near impossible. Problems at the venues, which are already behind schedule, have been further compounded by rains. WATCH VIDEOhttp://indiatoday.intoday.in/site/Video/99660/42/Is+Delhi+prepared+for+CWG+2010.html
A Headlines Today investigation has found that infrastructure at the stadia is in a state of collapse, with portions of what was completed damaged by rains.
Headlines Today went deep inside the stadia to find leaking ceilings, seepage and waterlogging. Thousands of crores spent on the projects seem to have gone down the drain. And the Games are just over two months away. 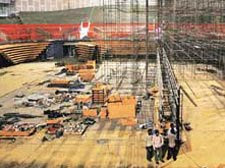 It took just two rainy days to wreack havoc on CWG's world class facilities - SPM Swimming Complex, the Kadarpur shooting range, Talkatora Stadium and Yamuna Sports Complex.
Talkatora Stadium
Delhi Chief Minister Sheila Dikshit inaugurated the renovated Talkatora Stadium - the dome-shaped icon of the 1982 Asian Games - on February 24.
But five months later, its splendour has all been washed away by a spell of overnight rain. And with it have gone Rs 150 crore spent on the stadium's renovation.
One downpour has flooded not just the stadium's entrance, but water has even reached inside. The corridor is flooded and the floors are slippery, making it impossible to cross it.
"With the rains, the cement lying around will flow into the drains, mix with water and harden. Weeds will grow. They are creating problems for the future," town-planner Jamal Ansari said.
"The kerb stones and infrastructure coming up in a mad hurry will suffer on counts of quality of work. The kerb stones are already falling apart," Ansari said.

Yamuna Sports ComplexAnother disaster in the making has been the Yamuna Sports Complex, which had been tipped as a world class structure.
The complex was inaugurated by Union Urban Development Minister Jaipal Reddy on March 6. Nearly five months later, just two days of rain seem to have sunk a whopping Rs 250 million spent on it.
Headlines Today found the stadium in a shambles. The ceiling had collapsed and the wooden flooring damaged by waterlogging. There was seepage too.
A brand new stadium meant to showcase India before the world is falling apart. "The infrastructure is already crumbling. They cannot finish the work now so they should just concentrate on finishing the necessary work. Get the stadia ready and leave the rest of the construction for later," said Kavas Kapadia, Dean of School of Planning and Architecture.
"The tearing hurry with which things are being done will lead to greater mess if now channeled now," warned Kapadia.

Escalating costsThe 2010 Commonwealth Games are set to break all records as far as expenses are concerned. Billed as the costliest Commonwealth Games, it has reportedly crossed a budget of Rs 30,000 crore.
Rs 150 crore will be spent on the opening and closing ceremonies alone.
Here's a lowdown about why the Games budget has spiralled. The details are part of a CAG report submitted to the Prime Minister's Office.
In May 2003, Rs 296 crore was allocated for upgrading the Games infrastructure. By December 2003, Rs 1,200 crore was added as operating expenses.
In April 2007, another Rs 3,566 crore was allocated; and in May 2009, Rs 12,888 crore was added.
As of July 2010, the total money invested in the Games has unofficially crossed Rs 30,000 crore.
Posted by tony mariadass at 2:26 AM