I suppose common sense prevailed in the end, when the incumbents were voted in at the biennial 28th Olympic Council of Malaysia general meeting at Wisma OCM this morning.

As it turned out, it was a breeze for Jegathesan, as affiliates decided to stick with the incumbents for the day. (Refer to Bernama's coverage on the elections)
Congratulations to all the office bearers, but the endorsement by the affiliates does not necessarily mean that they happy with the ways things have been shaping up for the last two years. 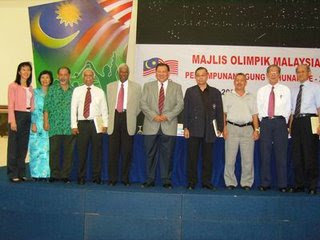 The fact that there was challenge for all major posts, only meant that there were affiliates who wanted changes. And the elected officials must take the trouble to find out, what were the grievances of the affiliates for wanting to see changes in the OCM line up and work at it to win back their confidence.

OCM have often been criticised that they are only active when there are multi-sports Games at various levels. They have to change that tag.

In all fairness to OCM, they have been working to get closer to the affiliates by engaging them in seminars and surely there is more they can do.
Tunku Imran, after the elections,said that the OCM line-up must work hard especially in developing domestic sports, implementing the rating system for the National Sports Associations and developing the Sports Channel (Sports TV) for its affiliates. He said that the main purpose of setting up the Sports Channel is to provide better and wider coverage for sports activities by the affiliates.

A suggestion would be to get all the affiliates to meet the current OCM line-up, get their feedback and work on it. That way, there will be check-list to see if the officials have delivered.

The last thing the OCM lineup should do is rest on their laurels, but take the challenges they faced at the election as a wake-up call to do better for the next two years.

For those who failed win in the elections, they should not be bitter and undermine the efforts of the current lineup, but come forward to join hands and work together in whatever way they can in the best interest of Malaysian sports. And OCM, on the other hand, should not shut out these officials just because they challenged the incumbents.

The sporting spirit should prevail in the end and sports and the athletes should be the winners!

Posted by tony mariadass at 1:00 PM No comments:


FA of Malaysia competition committee’s decision to endorse the recommendation by the disciplinary board (DB) to revoke the suspension is yet another sign of weakness. Refer to this.

I sympathise with Kelantan with their financial woes owing to the ban, but there cannot be any compromise when it comes to security at football matches when it involves the lives of the public.

There are rules to be followed in sports, and when compromise is made, we are courting trouble.

The disciplinary board made a decision after studying the case carefully in the first instance, and they should have stuck with their decision. Otherwise, they should have considered all the consequences, and probably given a lighter sentence.

Of course, it is a right for anyone to appeal, but sometimes, one has to look at the severity of the case before succumbing to sympathy and emotions in altering decisions.

Indications are that the national soccer body has once again bowed down to pressure.

I just hope that no untoward incidents occur at the Mohamad IV Stadium in the remaining matches that cause the FA of Malaysia to regret their decision.

FA of Malaysia will have Kelantan first fulfill certain obligations before their next home match against UPB FC-MyTeam on June 16. It will be interesting to see what these obligations and how different is going to be from all the other teams who are required to meet security requirements.

Is FA of Malaysia continuing to bend backwards on their decisions, every time the affiliates appeal or come up with threats that they will be withdrawing from the League.?

Already, Kelantan could be courting trouble by giving their fans a treat, as Kafa plans to mark the re-opening of the stadium with a friendly against Premier League side Proton on June 5 and another against FA Cup champions Selangor on June 9 with entry being free for both matches!

How is Kafa going to have crowd control and adhere to capacity of the Stadium without selling tickets? At worst, Kafa should charge RM1, for accountability.

Kelantan maybe happy with the decision, but it is hoped that FA of Malaysia is not further embarrassed by their change of decisions.

The one year ban on Kelantan from playing at home was imposed due to an outbreak of violence outside the stadium after the FA Cup semi-final first leg between Kelantan and Negri Sembilan on Apr 7. 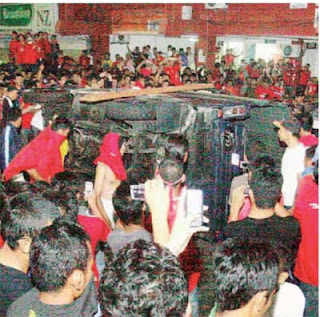 The current change in decision is the second time FAM has reversed itself in a case involving Kelantan.


FAM last month also cancelled its decision to award three points to KL Plus for the washed out opening Super League fixture against Kelantan in Kota Baru after finding the Sultan Mohamed IV Stadium pitch unsuitable for play.

Kelantan went on to win the re-scheduled fixture 1-0 at the National Stadium, their first win at their temporary home venue, last Tuesday.

In sports one sometimes have to be cruel to be kind.

Posted by tony mariadass at 12:44 PM No comments:

Talking about controversies, when the deadline of nominations ended on May 20, the first salvo was fired when the list of nominations was not released by OCM. And this is nothing new either. Refer to this story.

Hope good sense prevails among the 34 national sports associations who will cast their vote to decide the line-up to lead the Olympic Council of Malaysia (OCM) for the next two years.

May the best and those with sports and the nation at heart rule!

Posted by tony mariadass at 3:29 PM No comments: