Posted by tony mariadass at 7:45 PM No comments:

So much for transparency

A genuine sportswriter from Malaysia has been denied an opportunity to cover the world's greatest sporting event - the London Olympics next month.
Instead a journalist from a newspaper who does not have a dedicated page for local sports, a journalist who is not a sportswriter (at least presently) and who was based overseas when he applied for the accreditation to the Olympic Council of Malaysia, will be among the ten privileged sports journalists heading to the city of London.
Apparently this journalist had applied for the accreditation saying that since he was based in London, he wanted to cover the event and will be of assistance to the Malaysian contingent of journalists.
Question: Why could he not have applied as a correspondent in London in London itself?
For the record, Malaysia for this Olympics have been accorded by  the London 2012 Olympics Games Organising Committee 10 accreditation for journalists and 4 for photographers, as compared to the Beijing 2008 Olympic Games, where 8 journalists and 4 photographers were given accreditation and were issued as follows:
Bernama - 1 journalist, 1 photographer; Berita Harian - 1 journalist, 1 photographer; Nanyang Siang Pau - 1 journalist only; New Straits Times - 1 journalist, 1 photographer; Oriental Daily - 1 journalist only; Sin Chew Daily - 1 journalist only, The Star - 1 journalist, 1 photographer; Utusan Malaysia - 1 journalist only.
For London 2012, with two more journalist accreditation, it was said that the distribution would be more or less the same as in 2008, except that accreditation would not be given to The Oriental Daily, as it has limited circulation.  The main reason accreditation was we given to The Oriental Daily for the 2008 Olympic Games was because was held in Beijing, China.  No accreditation was provided to a Tamil language paper, but this around one was offered. Was Harian Metro, Kosmo or The Malay Mail  offered a accreditation this time around, I do not know. What about many of the regular sports bloggers? Should they not be considered too?
Was the Sportswriters Association of Malaysia (SAM) involved in the fair distribution of the accreditation?
But R. Nadeswaran of The Sun, who was based in London, had applied for one journalist accreditation.
Nadeswaran has since returned to Malaysia after his 18-month sojourn in London earlier this year and is the editor (special and investigative reporting) at the Sun in Kuala Lumpur currently.
Is it fair for him to be accorded the accreditation.
But he has been to the European championships. That should qualify him as a sports journalist. But was it a sponsored trip or an official trip from The Sun.
Even in this case for the London Olympics, it would be interesting to find out if he is going on his own, or sent officially by The Sun.
Olympic Council of Malaysia secretary-general, Datuk Sieh Kok Chi had this to say:" At the time of application of accreditation, Nades was based in London."
Did Nades know that his stint was going to end soon when he applied? Only he can answer that, although many say that he knew his stint was coming to an end.
I for one know how difficult it is for a sports journalist to get to cover an Olympics.
Some sports journalists have never covered the event even once in the career, as most of the time, the editors or the most senior sports journalists are assigned to the Olympics.
I was lucky as sports journalist to have been assigned to cover 2000 Sydney Olympics.
Indeed lucky, because I was accorded accreditation at the eleventh hour.
The Malay Mail was not among the privileged newspapers to be given automatic accreditation, but we had applied and was put on stand by. And the number of accreditations for 2000 was definitely much lower.
A month of so before the Sydney Olympics, Datuk Sieh called to say that Sin Chew Jit Poh will not be sending their journalist for the Games because of financial problems.
I was then offered the accreditation. But there was a catch.
Datuk Sieh said that if I was to apply under The Malay Mail, there was no guarantee that I will get the accreditation because the process was for the accreditation was to be returned to the Games Organising Committee and it will then be put in a pool and reissued depending on the number of applications and other criteria used.
He told me that the only way The Malay Mail will get an opportunity to cover the Sydney Olympics was just to make a name change but maintain the organisation!
Yes, I went to my only Olympics wearing an accreditation card bearing Sin Chew Jit Poh as my organisation. 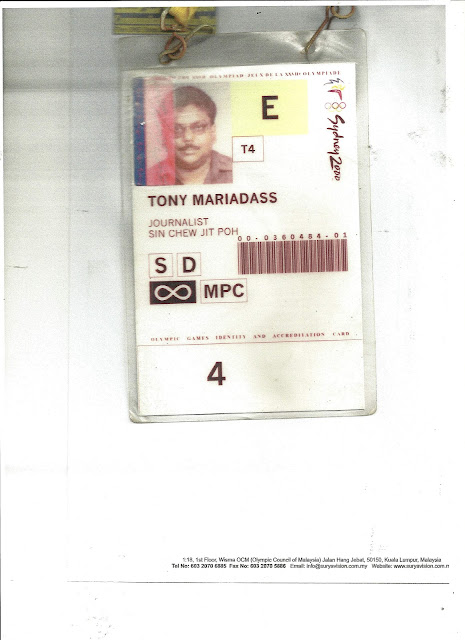 New Straits Times Dan Guen Chin who was covering the Sydney Olympics and my roommate at the Media Village, would tease me daily and introduce me to his friends and other media colleagues from other nations as a journalist from a Chinese daily!
But I covered for The Malay Mail and am proud that I was among the few sports journalists from the newspaper who had gone for the Olympics, although with a Sin Chew Jit Poh accreditation! It was a moment to be savoured in my close to 30 years.
The point here is to underline the difficulties to get an Olympics accreditation let alone wanting to cover the event.
Another point to make is that people who live in glass houses should not throw stones at others!
Posted by tony mariadass at 7:35 PM 10 comments:

Get your latest copy: 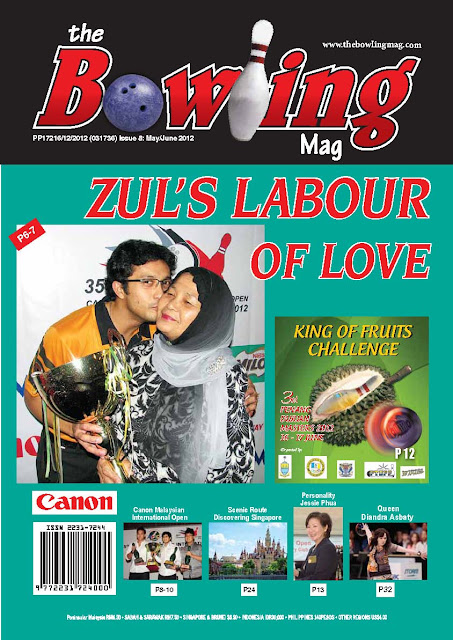 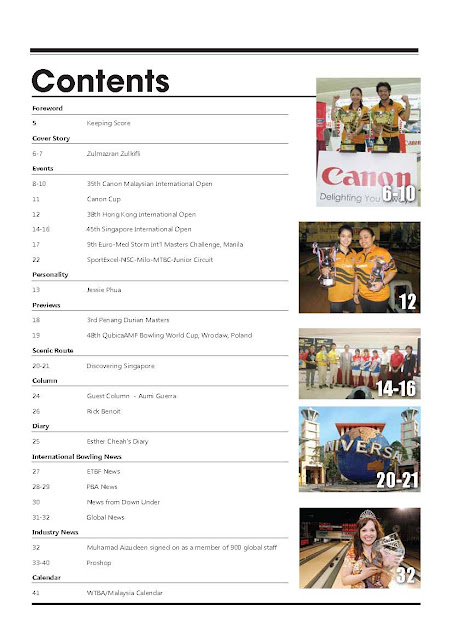 Posted by tony mariadass at 12:22 PM No comments: