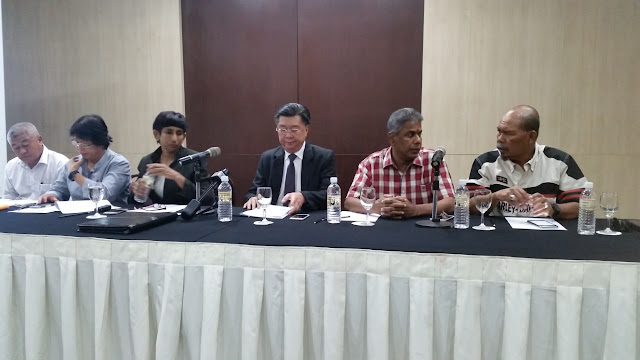 At the Press Conference on Wednesday

THE Malaysian Hockey Confederation (MHC) probably have got more than they bargained for with too much on the plate to chew, after their former coaching chairman Datuk Ow Soon Kooi’s clarifications.

Ow held a press conference of Wednesday with regards to his resignation as the vice-president of MHC, chairman of the coaching committee and a member of the national team’s management committee and to state some facts and figures with regards to his work with MHC.
What he had revealed surely must have ruffled some feathers in the MHC hierarchy.
However, it was not Ow’s intention to go on a witch-hunt or to point fingers at anyone, but merely to state his case with facts and figures to clear his tarnished reputation as a corporate figure by media reports with regard to his resignation and his background.
It was indeed a surprise that Ow had called for a press conference because he is one who shuns publicity and who works from the background without getting into the limelight.
But it was obvious Ow – a double Olympian (Montreal 1976, Los Angeles 1984), double world-cupper (Buenos Aires 1978, Bombay 1982) and the only Malaysian hockey captain (1979-1982) – was hurt the way his image was tarnished after relinquishing his posts in MHC where he had served with honesty, sincerity and above all the passion for the game.
Ow, a former senior police officer who hails from Penang, would have been a three-time Olympian had Malaysia not boycotted the Moscow Olympics in 1980.
Ow has served the sports for good 40 years as a player, coach and hockey administrator. He was elected as a vice-president of the MHC at their annual general meeting in 2015.
The least he should have been accorded when he decided to part ways with the game, was appreciation and thank you.

After all his reason stated when he relinquished all posts in MHC was because of his cervical spondylosis which was affecting his health and was in constant pain.

But when his integrity was in question, he probably was left with no choice but to come out in the open to clear his name.

Even at the Press Conference he remained his humble self and even efforts by the media to pinpoint personnel for his decision to opt out of the game he loved so much, he blamed no one or threw brickbats anyone.

He was magnanimous in wishing MHC all the very best and even said that his former teammate Soon Mustapha, who is the new coaching chairman has all the credentials to head the committee and was confident that he will do a good job.

At the Press Conference, he was merely stated facts to say that his coaching committee members had worked hard and did their job in all sincerity to help uplift the standard of the game in the country.

Of course, when they could no longer execute their roles effectively, four members of the coaching, decided to tender in their resignation after they found out that Ow had tendered his resignation.

Another former women’s hockey captain, K. Maheswari, had resigned from the committee much earlier because of her work commitment.

All were present the Press Conference in support of Ow.

Ow must have surely done something right and for the good of hockey, purely based on the support shown to him with the number of people who turned up to the Press Conference.

Ow clearly stated his only agenda to be involved in hockey was to give back to the game which has given him so much.

“I just wanted a platform to give back to the game I am very passionate about and which has made me what I am today,” said the 61 year-old who played as right-inside half during his heydays.

It was his love for hockey and people who cared for him, that made a difference in his life.

“I cannot forget my early days when I was struggling to make ends meet and even applied for exemption for school fees of $7.50 from the State Education department who granted me the exemption,” recalled Ow of his early days.

“Penang Free School was noted for its prowess in hockey and the hockey teacher N. Velu Pillay played a key role in developing me,” revealed Ow who was in Francis Light School during his primary school days.

“I am indeed lucky to be what I am today and owe it to many people along the way. I am forever indebted to them.

Ow, is tenth from a poor family of 13 in Georgetown, Penang.

“That is why, I give back to the game whatever I can and never forget my roots,” said Ow.

After school he started off as a waiter at a hotel in Penang.

But he was sacked after a while as he was taking too much time-off for hockey.

It was then that Osman Kamal, hockey convenor of Penang Port Commission PPC), who was the PPC’s security chief, who saw Ow play and was impressed.
Osman found out that Ow was jobless and was from a poor family and decided to offer him a job as a fireman in 1974 before moving up to be a security clerk.

"Osman was my ‘godfather’. If not for him spotting me and encouraging me, I will not be what I am today.”

Ow then applied to join the Police Force, where Osman assisted again and was recruited as Probationary Inspector in 1976 and retired at the age of 40 as Chief Inspector before moving onto the corporate world.

Probably Ow’s only mistake was that he only knows to work by following structures and rules laid down, as a corporate figure and former police officer.

Without doubt Ow is among the rare breed of sports administrators who is not only passionate of the game, but is in the game to give what he can and not take what he can or has ulterior motives and agendas.

His decision to withdraw himself from the sporting world is indeed a great loss. But at this moment his health is of paramount importance, and his decision must be rested and wish him all then best to get better in his health.

But rest assured, knowing Ow, he will continue to help sports and people n anyway he can and as usual from the background without any fanfare and publicity.

TONY is a sports
journalist with close to
four decades’ experience
and is passionate about
local sports.
He can be reached at
tmariadass@gmail.com

Posted by tony mariadass at 7:07 AM No comments: