Delhi's challenges to be the best Games ever

Hindustan Times Exclusive by Ajai Mansand
Sinking ranges, flooded warm-up zones, leaking ceilings, burst water-pipes and seepage everywhere. These are features of some of the brand-new Commonwealth Games venues — the places that will showcase India before the world. With just about 75 days to go for the Games’s opening ceremony on October 3, the full-bore shooting range at Kadarpur in Gurgaon, an official Games venue, has “collapsed”. Inaugurated two months ago by Sports Minister MS Gill, the range even hosted a test event for the Games but has now self-destructed after the


rains in the first week of July. On July 8, CRPF DIG and Manager (sports), MC Panwar (the Range is built on CRPF land) wrote a desperate letter to top Sports Ministry officials. Hindustan Times has a copy.
"Due to the incessant rains on the night of July 4 and 7,” reads the letter, “the various embankments on the range (which will host two medal events during the Games), have collapsed and extensive damages (sic) have been caused. The grassy expanse of lawn overhead the first box culvert has been washed away along with the side foot-tracks.”
The bad news doesn’t end here. The “all-weather road” (as the letter puts it) obviously wasn’t fit for all kinds of weather. The letter continues: “…the all-weather road near culvert No. 2 is about to collapse as all the underlying sand fillings have been washed away. There are visible landslides on either side of the remaining box culverts.”

“The chain-linked fences have come down at various places and its footings (sic) are hanging free in the air. The windowpanes of the facility block are leaking badly. The CPWD (Elect) has made numerous holes on the rooftop for split ACs resulting in seepage inside and damage to the false ceiling,” the letter adds.
Former CRPF DIG and sports manager, TS Dhillon, on whose recommendation the range was built inside the CRPF complex, was unavailable for comment. He designed the range.
Rahul Bhatnagar, one of the two joint secretaries in charge of the Games, told HT that they had "referred the issue to the Central Public Works Department". "There is no structural damage to the big culverts built underground, for rainwater to pass through without damaging the range. The mud has settled on the range," said Bhatnagar.
What makes the situation even more embarrassing is that this is just one more in a long list of shortcomings of the proposed Games venues.
The "new" Dr SP Mukherjee Swimming Complex was inaugurated on Sunday despite the fact that parts of the complex are far from complete. Even as the inauguration was on, a water pipe malfunction sprayed water all around. Crucial aspects of the competing/non-competing areas like lap timers, wall plaster etc were either missing or already in dilapidated condition.
Or take the Talkatora Boxing Stadium. The holding and warm-up boxing areas, located in the basement, have major seepage problems --- no one obviously factored the rains into any construction design. There was some flooding inside because of leakage while outside, there was more than a foot of water all around.
This all comes soon after the Yamuna Sports Complex episode, where the false ceiling collapsed and the wooden flooring got damaged because of water-logging. Both will now have to be replaced. 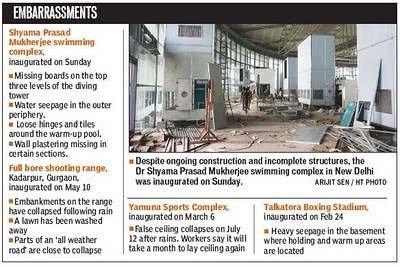 Commonwealth Games: Delhi's Mission Impossible?
NDTV Corespondent - New Delhi:  The rugby stadium for the Commonwealth Games is ready. It was inaugurated on Thursday  by Sports Minister MS Gill and Chief Minister Sheila Dikshit at the Delhi University Campus. The Rugby Sevens event will be held at this venue, which has been built at a total cost of Rs 300 crore. The state-of-the-art complex, spread over an area of 10,000 metres, will also be the training venue for netball, boxing, women's wrestling and athletics. 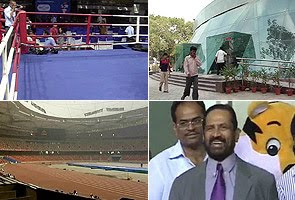 But elsewhere things don't look as good. The roof of the Yamuna Sports Complex, that will host the table tennis and archery events has collapsed. That will take at least two weeks to fix, something the Archery Association is not amused about. "Greater the delay, greater the cost and the compromise with the quality and problems will be created", said the Archery Association chief VK Malhotra.
The Delhi Development Authority (DDA) is building the Yamuna sports complex says things are under control, a sentiment echoed by the  Commonwealth Games Organising Committee.  It's Secretary General Lalit Bhanot said, "The roof has not crashed, water blockage of drains is different from a roof collapse."
This is not the first monsoon setback for the games. Last week rain water entered the badminton and squash stadia at another Games venue. All civic agencies have said the stadia will be ready on time. The Games, which begin on October 3, will have 17 disciplines to be held at six venue clusters and five stand-alone stadia. The big worry now is that delays may not leave enough time to properly test the facilities at the different venues.

Read more at: http://www.ndtv.com/article/cities/commonwealth-games-delhis-mission-impossible-37751?cp
Posted by tony mariadass at 9:45 AM