Swimming complex better than the best: MS Gill
Sports Minister, MS Gill, on Sunday said the newly-built Rs 377 crore Dr SP Mukherjee Sports Complex was even better than the one in Melbourne, which hosted the Commonwealth Games in 2006.
At the inauguration attended among others by Chief Minister Sheila Dikshit and Games Organising Committee chairman Suresh Kalmadi, the minister said, “The real credit for this masterpiece goes to the workers. I hope they get a nice bonus.”
Dedicating the imposing structure, which boasts of an eight-lane competitive and a five-lane warm-up pool, to the nation, Gill said, “India has gone to the extent of spending lavishly on the Games in order to produce the best.”

The minister said he was hopeful the Jawaharlal Nehru Stadium and the Thyagaraj Stadium too would be completed on time.
A visibly pleased Chief Minister, Sheila Dikshit, said, “The inauguration of this complex is a dream come true, especially as it is world class.” -HINDUSTAN TIMES

RAKESH RAO - THE HINDU
Amid the usual fanfare, the Sports Minister M. S. Gill dedicated to the nation yet another “world class” sports facility the remodelled Shyama Prasad Mukherjee Swimming Pool Complex in the presence of Delhi Chief Minister Sheila Dikshit and Commonwealth Games Organising Committee chairman Suresh Kalmadi on Sunday morning.
From the pool-side, tis air-conditioned indoor arena appeared impressive. With a seating capacity of 5,000, and a roof, with several other ‘world-class’ features, this facility, like all other Commonwealth Games venues, is being claimed as another state-of-the-art complex. 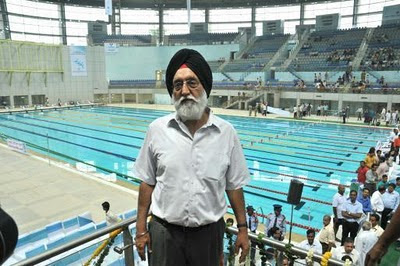 Union Minister for Youth Affairs and Sports M.S. Gill at the inauguration of the Dr. S.P Mukherjee Swimming Pool Complex in New Delhi on Sunday. Photo: S. Subramanium
The novelty of having such a stadium, which is claimed to have the largest Cohestrand-supported, “breathable”, elliptical aluminum roof, is beginning to sink in. But a closer look revealed a different picture.
An instant eye-sore was the work done in fixing the tiles inside the pool. They appear uneven and unattractive. Obviously, it is the result of a job done in a hurry. The starting blocks, not installed till Saturday afternoon, have been put in place. But the technical experts from the Swimming Federation of India (SFI) were not sure whether these blocks have simply been “placed” for the inaugural function or firmly installed.
The diving tower is flawed beyond comprehension. The elevator, which was in use since 1982, is now missing. Though the FINA, the world body, does not make it mandatory to have a lift for the divers, thoughtful diving-pool builders around the world make sure there is one.
Mindlessly, there is no provision to build one. An additional elevator for the use of the divers would not have been a luxury for a facility that has cost a whopping Rs. 377 crore.
The absence of a railing or a glass wall on the second level of the tower is an open invitation to disaster. A diver faces serious danger of falling on a concrete floor from a height of about 2.5 metres, obviously with grave consequences.
The tower’s narrow staircase, only around two feet wide, is grossly ill-planned. Worse, the roof in the area leading to the spring-boards is only six feet high. Taller springboard divers from countries like
Australia, England and Canada if we are talking of only the Commonwealth Games will surely have to stoop before they can think of conquering the pool.
With the three-day Federation Cup meet, a test event ahead of the Commonwealth Games, just nine days away, the boards for platform diving are yet to be installed. “The officials from the Sports Authority of India (SAI) have assured us that it will be available in two days,” said a worried SFI official adding, “If the action is not expedited, I doubt, if it will be possible for us to hold the highboard diving during the test event.”
The athletes’ area and the athletes’ change-rooms are awaiting action on a war-footing. Showers are yet to be installed. The drainage can be checked only after that. The small change-rooms have left the SFI officials aghast. “The
earlier change-rooms were big enough to accommodate 25 swimmers at any point in time. The new one is too small and has only 18 showers where as the requirement was about 40-45 open showers,” explained an SFI technical official. He further said, “In the days leading to the Games, with around 550 entries expected to be confirmed, I dread to think about how we are going to deal with the complaints of the swimmers.”
More technical flaws of this one-of-a-kind pool are waiting to be discovered once the domestic swimmers and divers test the facilities on July 26. Interestingly, the Minister, in his long-winding speech, urged the Commonwealth Games Federation chief Michael Fennell to ensure the participation of leading names like sprinter Usain Bolt of Jamaica and cyclist Sir Chris Hoy of Scotland in the Games.
“People of this country were waiting to see these world and Olympic champions. These Games are for the athletes, not for the officials People have every right to say, if only Gill and Kalmadi were to run, why spend so many crores,” he said in good humour.
Ironically, for the inaugural function, those from the SFI were not invited. Worse, The Venue Commander and well-known swimmer Khajan Singh, a silver medallist in the 1986 Asian Games, also was not extended an invitation. Khajan is expected to be handed over charge of the stadium this week.
Posted by tony mariadass at 9:52 AM