The Pillars of Klang Valley soccer

It was a rare occasion this evening when the stalwarts of Klang Valley had gathered in one place -  at the cremation ceremony of Dato' Thanapalan Paul Murugasu this evening to pay their last respects.
I am talking about former FA of Selangor secretary, S. Anthonysamy (1980 - 1987) and treasurer  R. Ramalingam (1971-1986) and former Kuala Lumpur FA secretary, Datuk K. Rasalingam (1975 to early 2000) who was also the FA of Selangor secretary from 1973-1975.
The late Dato' Paul Muragasu also was with the FA of Selangor as secretary from 1960-1962 and then again from 1971 to 1972.
As a sports journalist with The Malay Mail from the 80s, I have worked closely with all the officials when coverage of the Selangor and Kuala Lumpur league was huge. Not to mention, it was the glorious days of Malaysian soccer and many would say that if a player can earn a place in the Selangor team, he was good enough for the national team.
Yes, indeed was glorious days and these officials were part and parcel of that organisation that made Malaysian soccer tick.
Another respected sports official, C. Ayathurya, the then Government Services Club secretary, who was also at the ceremony, when he saw the three officials sitting together he commented: "The three pillars of Malaysian soccer are here. But what has happened to those glorious years. What has happened to Malaysian soccer these years."
The only respond from the three officials was smiles!
Anthonysamy, Ramalingam and Rasalingam had their fair share of criticisms against them from the media and critics, but what they achieved those days is still something to talk about till today. They did not have the kind of funds to manage the associations like they have today, but they ran their associations efficiently and delivered results. There were well organised and highly competitive leagues right up to the district levels and new talent surfaced every season.
The younger generation may not know them, but these officials were a rare breed!
I had a call earlier this evening from a sports journalist asking details of Dato' Paul Murugasu's funeral as he had to write an obituary.
This is what he had to ask: "That fellow who passed away, who was the secretary of FA of Malaysia, can you give me details of his death....."
That fellow...Dato Paul Murugasu, was a highly respected man in the Malaysian soccer circle and a distinguished gentleman......if this is the way our young generation is going to show respect to our elders and who have served the sports well, I really feel sorry for the future of our Malaysian sports.
Respect is earned and Dato Paul Murugasu fully earned and deserved it!
Rest in peace Dato'Paul Murugasu and to those officials who have done Malaysian soccer proud, we salute you!
Posted by tony mariadass at 12:32 AM 2 comments:

Updated:
Dato' Thanapalan Paul Murugasu, the FA of Malaysia secretary from 1980 to 1985 passed away this morning (Monday).
Dato' Paul Murugasu, has been ill for sometime now and was 86 years-old. 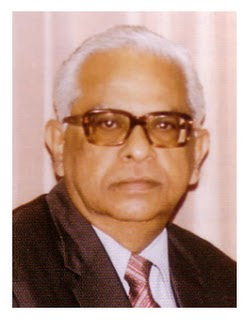 Paul took over as secretary-general FA of Malaysia from Datuk Kwok Kin Keng (1951-1980) and Datuk Paul Mony Samuel took over from Paul Murugasu.


FA of of Malaysia other secretaries were:
During the tenure of Dato' Paul Murugasu football was going through its glory days and was enjoyed by almost everyone in Malaysia.
Datuk Paul was born on 8 September 1924 in Kuala Lipis in Pahang. He had his primary education in Kampar, Perak and completed his Senior Cambridge at Anglo Chinese School in Ipoh.
He worked as a teacher from 1948 to 1959, beginning at Trade School in Kuala Lumpur and later at the Kajang High School before moving to the Pasar Road English School.
He joined the Election Commission in 1959 and served as the State Election Officer in Kota Bahru (1961-1965), Seremban (1965-1970) and Kuala Lumpur from 1970 until his retirement in 1974.
Datuk Paul joined FAM in 1973. He served his “apprenticeship” with the dynamic Datuk Kwok Kin Keng in FAM taking over in 1980. He held the post for seven years and served under two presidents – Tan Sri Dato’ Setia Raja Haji Hamzah bin Abu Samah and HRH Sultan Haji Ahmad Shah.
He was honoured by the HRH Sultan of Pahang in 1983 and conferred a Datukship

Posted by tony mariadass at 6:42 PM No comments: