Zulmazran Zulkilfi plays best under pressure and that is exactly he did today on the second day on the QubicaAMF Bowling World Cup in the second blocks for men at the Melaka International Bowling Centre (MIBC).

From an overnight position of fifth, Zulmazran shot up to third spot with a combined total of 3,534 behind leader, Korea’s Choi Yong-Kyu (3,666) and second placed Sweden’s Martin Larsen (3,573).

On Monday night after his first block of eight games, Zulmazran had said that he would be aiming to be among the top three today, and did just that.

And today after having achieved his third place, he is still not satisfied and wants to improve further in his overall game and total pinfalls.

“Yes, I achieved my target to finish among the top three today, but I could have done better,” who never amazes by setting higher targets.

“I have only had five strikes in a row in the last 16 games and I certainly can improve on that,” said Zulmazran who rolled a perfect 300 game in his third placing finish last year in Hermosillo.

“I also could do with a few high games. My highest so far is 257 in my final game on Monday,” said Zulmazran who is competing in his third Bowling World Cup after his debut in 2002 in Riga, Latvia where he finished 13th. 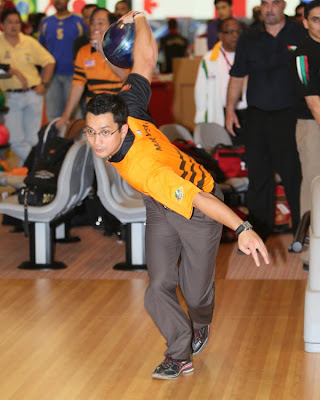 “I also had to do adjustments to my game to get going today. In my first game, I fired only 173 and that got me worried.

“Tomorrow is going to be another new day because we cannot come prepared like today when we had come certain for certain conditions we expected to be laid out.

“It will be a fresh start again and I have equipment and guidance to make whatever changes is necessary and hope to further improve my performance going into the next round.”

Asked whether the high standards and goals he sets, does not put added pressure on him, he simply replied: “Tiger Wood had said that if one does not feel pressured, then one does not have a chance to win.”

When further pressed what would eventually satisfy him in this championship, he replied; “Winning the title and in front of my home crowd. It will also be a birthday present I will remember of life.”

“I was in second spot last night and only two pins away from the leader (Michael Schmidt). I just continued to bowl well and the lanes were good to me,” said the 24 year-old who a member of the Korean team who won the trios gold and team silver at the Men’s World Championship in Thailand last year.

Asked whether he will remain on the top tomorrow, he simply replied: “Yeah of course.”

Sweden’s Martin Larsen, who was in overnight third spot, was happy that he was consistent and moved up one rung.

“I can’t complain much today. I did well except for the third game when I picked up only 172. But I bounced back and glad with the finish,” said Larsen who finished runners-up last year in Hermosillo, Mexico.

This is third appearance after having made his debut in Singapore in 2004 where he finished 11th.

Larsen said he is a little concerned for tomorrow as not only will the competition in the third and final block of eight games as everyone will be trying hard to finish among the 24, but will also have the stamina and focus for a long night.

The men who bowl their final block at 3pm and those who make the cut of 24 will be back on the lanes at 8pm for second round of eight games for the cut to the top eight.

Indeed, the challenge was getting heated up as there was constant change in the placing especially at the bottom half to make the cut of 24.

Among the surprise strugglers are pre-tournament favourite, Walter Ray Williams Jr, the PBA player who has a record 45 PBA titles. He has been struggling from day one, but yesterday made progress to move from an overnight 36th to 21st in his fifth game today, but a poor 147 in his seventh game in the second block, saw him slip and finally finished 34th.

But the bowlers in the competition was not writing him off yet.

Another top bowler who is struggling is Singapore is Remy Ong who is languishing in 49th spot in a field of 87.

Remy a southpaw, together with another notable bowler, Philippines’ Paeng Nepomunceno, have been having problems with the lanes.

However, Paeng who was in an overnight position of 32nd have managed to get into the top 24 bracket today with his 22nd finish.

There are total of six left-handers in the men’s category and all have been having problems.

It will indeed be battle stations tomorrow as the scramble to be among the top 24 will be intense.

Posted by tony mariadass at 5:38 PM