It returns to its home ground instead of the MPPJ Stadium in line with cost cutting with the current economic situation.

However, rest assured that the tournament is not going to be any less competitive, entertaining or glamorous.

Probably going back to its humble beginning ground will be more meaningful and nostalgic especially with the clubhouse just a stone’s throw away which has grown over the years to become a beautiful clubhouse with facilities which include hostel and multi-purpose courts.

The ten-a-side, two-day tournament will see teams from various countries, including rugby powerhouses such as , and putting on a display of some of the best rugby ever seen in .

It is a little known fact that one of the world’s leading 10s tournament, was conceived by the Combined Old Boys’ Association (COBRA). It was in that the world’s first 10-a side rugby tournament was held in 1967. The tournament went international in 1992 and as the saying goes … the rest is history.

Throughout its 40-year history, the tournament has always been very competitive with the participation of top club teams such as Canterbury Rugby Union of New Zealand (2007 Champions), Penguins International RFC of England (1993-1994 and 2006 Champions), Marist St Joseph of Samoa (1996 and 2004 Champions), Red Rock of Fiji (2003 Champions) and Argentina’s Mendoza Rugby Association (2005 Plate Champions finalist). They are joined by Malaysian club heavyweights Eagles, NS Wanderers as well as the host team COBRA.

Sponsors, HSBC Bank Malaysia Berhad have continued their association as Title for the fifth year running and that speaks volume of the sponsors believe in the tournament and the organisation. The title-sponsorship is valued at RM100,000.

COBRA President, Datuk Krishnan Tan, the man who has played a key role in what the club is today said, “The prevailing economic situation has affected sponsorship contributions. Nevertheless, with the objective of continuing a tradition started 42 years ago and also considering that the event is a highlight of the Malaysian rugby calendar, COBRA decided to go ahead and host the tournament once again.

“Rugby, like many other sports in the country, needs all the help which can be extended and I applaud HSBC for their generous support.

“HSBC’s support of this tournament has enabled us to deliver at the doorsteps of Malaysian rugby fans a display of world-class rugby. Over the years, we have also seen a steady rise in the quality of rugby at the 10s. We hope this will inspire our young rugby talent to want to improve their proficiency in the sport,” he continued. 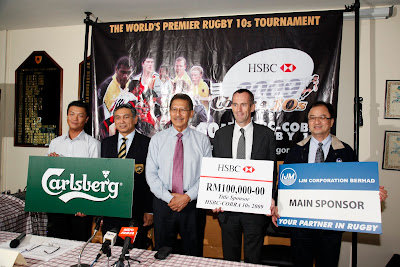 Malachy McAllister, Managing Director, Global Banking of HSBC Bank Berhad said, “HSBC’s partnership with COBRA and rugby began many years ago and the relationship has grown over the years. We are proud to be the title sponsor of this international event which is playing a key role in promoting rugby in . instills many positive values including camaraderie and sportsmanship.”

“Globally, HSBC also supports several rugby clubs and initiatives, such as the and the HSBC Asian 5 Nations. Our support for this tournament is in line with HSBC’s Corporate Sustainability initiatives for educational programmes that include youth development and sports, especially rugby.”

Datuk Krishnan Tan also reiterated COBRA’s objectives of facilitating world-class rugby for all Malaysians. “We would like to encourage all sports and rugby fans to grab this opportunity to come and watch international class rugby teams in action.”

For this weekend regulars Penguin International RFC of and NNK of are back. The Tournament, which has a reputation for attracting some of the best club teams, will be seeing a record number of first-timers from as well as foreign teams including the Indian national team and Swanbourne Nomads from .

In its 12th outing to , Penguin International is drawn in Group A with newcomers Eagles and Kuching Rugby Football Club; and ASAS.

Malaysian club heavyweight NS Wanderers, who’s having a good run this season with a string of victories, is drawn in Group B with South Africans NNK, another local heavyweight RSC and newcomer Terengganu Tigers.

Group C led by east-Malaysian supremo SRC Eagles will play alongside Swanbourne Nomads, JLJ and the Indian national side calling themselves Indian Invaders.

An exciting weekend is indeed in store for rugby enthusiasts and sports lovers in general. Be there to experience it live!

Posted by tony mariadass at 6:06 PM