Working overtime to get venues ready for CWG....but 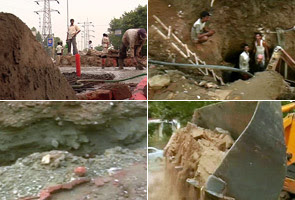 Click to Expand & Play
New Delhi:  Bansi says he sleeps on the footpath, if it rains he and his fellow workers stand under flyover.
They're part of a huge labour force that is now working overtime to ensure that the venues for the 2010 Delhi Games are finished in time.
The state government collects 1% of the total bill from construction companies for labour welfare. Over R 389 crores have been collected, and that money is supoosed to go towards housing and education loans for the workers, scholarships for their children and better health facilities. Workers can even get a loan from this corpus from their chidren's wedding.
But there is a catch - to avail this facility workers have to be registered with the labour board. Bansi and his friends aren't and Bansi says he doesn't know such a scheme exists, " We are not registered. No one told us about any facilities."
Of the 6 lakh workers in Delhi, only 26,000 are registered. But the story isn't much different if you are registered. Ganpat has registered himself with the labour board but he says the promised facilities remain just that -promises. "They promsied so much.They said we would get loans, education for chidlren and money for their weddings. Nothing! We've got nothing."
The government seems  to be busy passing the buck. The Chief Secretary of Delhi, Rakesh Mehta told NDTV that the labour department would how the nearly R400 crore collected for labour welfare been spent.
The labour board says the money "should be at a bank unless its been diverted."
"To the best of our knowledge, R20 crores was given to the education department, of which R90 lakhs have been spent. R7 crore was given to the health department", says Subhash Bhatnagar, Member, Labour Welfare Board.
Activists say of the R389 crores collected, only one has been spent. And no one seems to know for sure where the rest of the money is.
Posted by tony mariadass at 3:20 PM