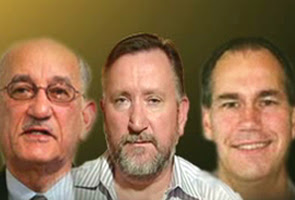 New Delhi:  The allegations of mammoth corruption in the run-up to the Commonwealth Games are steadily scaling up to some of the senior-most men involved with organizing the event.
It now seems Commonwealth Games Federation (CGF) President Mike Fennell and CEO Hooper pushed for contract for EKS.
NDTV has learnt that Hooper 'recommended' Craig McLatchey's EKS to the Organising Committee. The Organising Committee's Executive Board accepted the recommendation. DDA Vice Chairman Dinesh Rai is said to have raised concerns over the Rs. 29 cores deal.
Originally from Australia, McLatchey is a resident of Switzerland, and is the sole owner of Event Knowledge Service (EKS), a company hired for 29 crores as a technical consultant for the Games, in partnership with financial consultants Ernst and Young. EKS has in the past worked on the Sydney Olympics and the Melbourne Commonwealth Games. An interim report of the Comptroller and Auditor General of India said the EKS deal was an example of "undue favours."
And there certainly seems to have been a culture of financial impropriety, to put it mildly.  Last week, NDTV reported that SMAM and EKS had common ground: McLatchey. SMAM or Sports Marketing and Management, owned by Mike Bushell, was in charge of landing sponsors and fat-cat international advertisers.
They were expensive, but the Commonwealth Games organizers argued, they were worth it. Both companies had been closely associated with prestigious sporting events like the Sydney Olympics and the Melbourne Commonwealth Games.  But the fusillade of allegations led to SMAM losing its contract.
The Games' Organizing Committee (OC) said the deal was off because of "non-performance." It was not exaggerating.  SMAM had failed to land any corporate advertisers.  Those who had signed on were Indian firms who dealt directly with the OC, or Public Sector Units (PSUs), who have now said they're likely to back out as sponsors because of the controversy surrounding the games.
Unraveling a complicated trail of ownership, NDTV discovered that McLatchey was also a stake-holder in SMAM.  He had also been a member of a coordination committee that was set up to liaise between the Games' international organizers, and those handling the Games in India.   At the very least, there seemed to be a serious conflict of interest in McLatchey winning big-bucks deals.
McLatchey said, in response to NDTV's report, that he had steered clear of any meetings that could have led to a conflict of interest. He also said that his relationship with Bushell's SMAM was a personal one, and not a business one. "This one F class share is part of the estate planning for Mr Bushell and his wife and was done to facilitate on-going support for Mr and Mrs Bushell's children in the event of the simultaneous death of Mr and Mrs Bushell."
McLatchey also emphasised that he had "no business interests or voting or controlling rights in SMAM or in any other company owned by Mr Bushell."
Posted by tony mariadass at 9:26 PM