Kalmadi is the boss of CWG 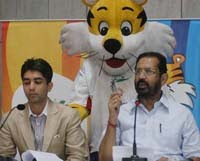 CWG Organising Committee chairman Suresh Kalmadi (right) and Commonwealth Games Delhi brand ambassador Abhinav Bindra at a press conference in New Delhi on Tuesday.
Kalmadi said delivering a good Games was a challenge he has taken up and there was no question of resigning from the post as he had done nothing wrong. He also sought to scotch the perception that his wings have been clipped in the wake of the corruption scandals.
Asked specifically whether he was still the boss of the Commonwealth Games after the government set up an empowered committee of bureaucrats, Kalmadi said, "Yes. Organising the Games is my responsibility. I am continuing with it."
"Group of Ministers was there. The committee of secretaries under Cabinet Secretary was always there. The Prime Minister had a meeting and he has asked all these committees to get more active and give more support. I am getting more support from government and I am the OC chairman," Kalmadi told PTI in an interview here today.
"CGF chief Michael Fennell had come and he had given a good report. So I welcome all this because of the circumstances," he said.
The build-up to the October 3-14 Games has been marred by a series of corruption scandals and construction delays but Kalmadi said things were now under control and his team was capable of delivering a "good and transparent" Games.
"I don't know why all these campaigns started. Everything was smooth till the last 15 days or so. All the foreign countries are saying there will be a good Games. I am ready to face any inquiry after the Games," he said.
"Our reputation is at stake and after all these years of hard work I don't want to go down in this manner. That is why I want this inquiry," Kalmadi pointed out.
Asked whether the thought of resignation had crossed his mind in the wake of these allegations, he said, "No. This is a challenge I have taken up. I had promised the CGF when we won the bid that I will deliver a good Games. So there is no question of any such thought."
Kalmadi admitted that he had a tough time in lifting the morale of his team after the alleged corruption scandals came out in the media.
"It was not so much a distraction for me but it was for my staff. I have to keep up the morale of my staff, definitely I had a tough time on that," he said.
"Naturally I have to see that the morale of my staff is OK. I have to see that this does not happen again. I have to put them on track. I have addressed them and told them to go ahead without worry," he added. .
On whether the negative publicity that the Games have got was part of a bigger political game masterminded by his own party colleagues, Kalmadi said, "I don't want to say anything, let them say. I don't want to respond. I will ensure the Games go off well.
"The PM has supported us to a great extent. So no worry on the count that we will deliver the Games. We are focused now. Next one month I will be fully focused and I am not distracted," he said.
Asked if too much work was left for the last minute considering the bid was won in 2003, Kalmadi said, "Initially the question of sanction was there. You have to get certificates to start work. You have to go to the MCD, NDMC and various agencies. Then there were environmental issues and finally somebody went to court. All these processes took time.
"Infrastructure, we have got a little late but now everything is under control. For overlays, we have less time.
We are racing against time in overlays but we will do it," he said.
Kalmadi refused to take any responsibility for the scandals that have rocked the Games, saying his job was to deliver a good Games.
"I have to deliver the Games and I am doing that. That is my most important responsibility. After that there is the inquiry and let us see who has done what. Let us see.
"All the allegations are exaggerated like Rs 4000 for toilet paper. Is it possible? These are all wild allegations... we will see after the inquiry. We will give all the things (for inquiry). I am sure all charges will be proved wild charges," he asserted.
On whether India's future bids for mega events like Olympics and Asian Games would be affected in the light of the controversies, Kalmadi said "it is normal for every Games to have some charges or the other".
"When we bid there is euphoria. There is disenchantment when the reality sets in. Then there is search for the guilty.
It is the pattern for every Games. Then there is persecution of the innocent and finally there is successful Games and glorification of the uninvolved. This is the pattern everywhere," Kalmadi said.
He said the OC will try to get the people of Delhi involved in the Games.
"Next one month will be focused on Delhi. Delhi government is doing its bit, we are doing our bit. My message is have faith and trust in us. We will give a good Games and a very transparent Games," Kalmadi said.
Posted by tony mariadass at 9:40 AM