Weightlifting auditorium inaugurated
Press Trust of India- New Delhi:  The newly-built weighlifting auditorium inside the Jawahar Lal Nehru Stadium was on Sunday inaugurated by Sports Minister M S Gill but water logging and seepage at the venue once again exposed how ill-prepared the capital is to host the October 3-14 Commonwealth Games.
Sunday was also the deadline of all venues and stadiums constructed by CPWD and SAI to be handed over to the Games Organising Committee but the reality is Games' venues present a grim picture of unkept promises with the construction woes further compounded by monsoon. 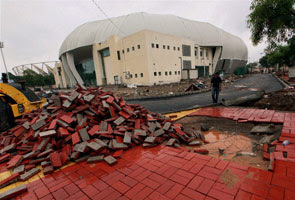 The auditorium is a new addition to the existing Nehru Stadium, which was constructed during 1982 Asian Games. The work has been executed by CPWD and the arena will also be used as convention centre cum opera house during the legacy period.
With a total seating capacity of more than 2100, it is one of the largest auditorium in India built at a cost of Rs 80 crores. But a walk through the interiors of the arena and one can see the cracked false ceilings near VIP/Games Family Lounge and Warm-up area, which shows their urgency to meet the handover deadline despite tardy work.
Even the four toilets, which were surprisingly guarded by labourers to avoid mediapersons, had cracked false ceiling and a filthy smell enveloped the area.
The exterior of the stadium was in equally shocking state with fresh spell of downpour on Sunday clogging the entry and exit of the main gate.
Behind the arena, loose tiles and grills, scattered iron rods and tons of rubble were enough to raise serious doubts about the tall claims made by Organising Committee chairman Suresh Kalmadi, Chief Minister Sheila Dikshit and Sports Minister M S Gill.
But Urban Development Minister S Jaipal Reddy and Gill had a bizarre explanation to give.
"All stadiums are world class and this is one of them. Roof of this arena is of very complex design and has not been done before in India. There is ?no serious flaw in the roof as repoted by many," Gill said.
"We have introduced a new drainage system and there are no such leakages. If there are any at all then they will be attended to," Reddy said.
Among the important green building features of the auditorium are thermal insulation of the entire roof with rock wool insulation, gypsum board partition and wall panellings, double glazed tinted glasses for external glazing, rain water harvesting, energy efficient HVAC chillers with VFD and heat recovery units provided in AHU rooms for fresh air.
The arena also has two-level underground basement parking for 300 PCUs having mechanical ventilation system, sports lighting 2200 LUX suitable for HDTV transmission and controlled by PLC from a single master control.

A scene outside the Jawaharlal Nehru Sports Complex Auditorium, which was inaugurated on Sunday in New Delhi. —
NEW DELHI: Rains once again exposed the shoddy work being done at several Commonwealth Games venues in the Capital on Sunday.
The venue for weightlifting at the newly-built, yet incomplete, auditorium in the Jawaharlal Nehru Stadium Complex, was inaugurated by Union Urban Development Minister S. Jaipal Reddy on Sunday.
Rain water leaked through the hyperboloid-double-layered aluminium roof on inauguration day to the embarrassment of the authorities including ministers and the engineers of the CPWD which carried out the construction.
Both Mr. Reddy and Commonwealth Games Special Officer H.S. Kingra explained that the roof was so designed as to allow all the water come down automatically. However, they could not explain why water was dripping in the upper and lower corridors of the auditorium.
The roof apparently was not ready as work was going on in haste till the last minute to prepare the venue for the inauguration. Covers were seen on several areas of the roof to prevent water from going down.
Expectedly, many areas of the auditorium, like the sauna bath facility, some of the toilets, the two-tier underground parking area, the gym and the periphery, were far from being ready. The basement wore the look of a pond because of the rains.
Poor finishing
The linoleum flooring of the main auditorium, with a capacity to accommodate 2100 spectators, was disappointing. The finishing was so poor that it looked like a temporary arrangement. The sheets used for flooring were coming off in several places.
Mr. Reddy was, however, so impressed with the auditorium that he said later it could be used as an “excellent opera house” where one could stage Shakespeare's plays.
The auditorium, built at a cost of Rs. 80 crore, is considered to be the largest in the capital city. It would be used as an opera-cum-convention center in the post-Games period.
A mystery
Why a brand new auditorium for weightlifting had to be built at such a cost for the Games in a city which does have several auditoriums that could have hosted the sport should remain a mystery.
Welcoming constructive criticism from the media, Mr. Reddy said the scribes should refrain from “exaggerating” things. “There should be a celebratory mood, people all over the country are excited (about the Games),” he said.
On the alleged financial irregularities in various activities related to the Games, Mr. Reddy said people responsible for it would not be spared.
Union Sports Minister M.S. Gill, who attended the function, was also disturbed because of negative media reports relating to construction of the stadia. He reiterated that the stadia were “complex state-of-the-art structures” built using “high-level of technology” and these should be appreciated. Like Mr. Reddy, the Sports Minister also requested the media not to focus on smaller issues.
However, he admitted that the complaints regarding the stadia would be looked into. “Rains will be there. Fine-tuning is a must. The CPWD and the Sports Authority of India (SAI) have been asked to depute officers at different venues and take care (of every problem),” he said.
Mr. Gill said the contractors had to redo the work where there was any complaint about quality.

Read more at  : http://www.ndtv.com/article/sports/weightlifting-auditorium-inaugurated-41334?cp
Posted by tony mariadass at 8:59 AM