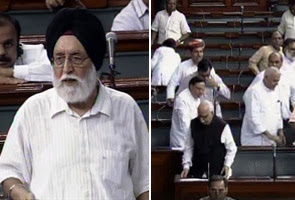 Click to Play
New Delhi:  BJP staged a walkout in Lok Sabha, claiming that M S Gill has insulted Parliament by suggesting MPs should use RTI to get information about CWG preparation costs.
The House is "the Supreme Body", how can we be asked to go down the RTI route, asked senior BJP leaders.Dissatisfied with the reply of the Sports Minister, Leader of the Opposition Sushma Swaraj led a noisy walk out of members of BJP and its allies, who chanted "we want JPC" while leaving the House. The government today assured the Lok Sabha that it was ready to consider any kind of inquiry into alleged corruption in the Commonwealth Games projects after the event was over.
"We are ready to consider any kind of inquiry after October 15. Our government will continue to be there after October 15. Let the focus at present be on the sportspersons when the games are not far off," Sports Minister M S Gill told the House replying to a debate on the games.
"Nothing will be hidden or covered up," he said in his hour-long reply which was repeatedly interrupted by Opposition members, who continued to pose queries on allegations of corruption and diversion of funds. The refrain of Gill was that all was well with the preparations for the CWG and that the government has gone the extra mile to have the best facilities for the 12,000 sportspersons who would arrive soon. Referring to the sacking of CWG Organising Committee Joint Director General T S Darbari and suspension of some other officials, Gill said his ministry was behind these strong actions.
Gill said, "the Games is a matter of national prestige" and "the government is a back-up to the Games". He said the Organising Committee is responsible for the Games and responsibilities are clearly defined. Congress member Suresh Kalmadi, who is chairman of the CWG Organising Committee and is in the eye of the storm over corruption charges, was not present during the reply.
Posted by tony mariadass at 10:20 PM