Job at hand must be done

I will quit, if my leaders ask me to: Kalmadi 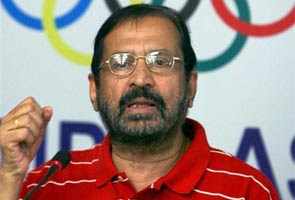 New Delhi:  Suresh Kalmadi on Friday ruled out stepping down as Commonwealth Games Organising Committee Chairman in the wake of corruption allegations but said he would quit if asked to by Prime Minister Manmohan Singh or Sonia Gandhi.
He said his first priority was to make a success of the Games and "will not run away from responsibility" but would quit after the event if anything was found against him.
"If my leaders and IOA don't want me there, then I am ready to quit. If there is something so big that I have done wrong. But I tell you there is no wrong. Let the inquiry report come out. There is nothing to be ashamed of," Kalmadi told a  TV channel.
He was asked if he would step down now in the wake of a spate of allegations of corruption in giving contracts and Kalmadi said instead of stepping aside, he would take action against those who are found guilty.
"If some action is (found to be) wrong, then definitely I will not spare anyone who is responsible for it...There is no charge against me, it is against somebody else," he said.
Quizzed about the 'doctored' e-mails from the Indian High Commission he made public to justify payments worth lakhs of pounds to a UK-based company for services provided during the Queen's Baton Relay in London, Kalmadi said he did not know whether the mails were authentic.
Organising Committee's Joint Director General T S Darbari, who oversaw the QBR's London leg, was suspended after the furore and the IOA chief said there is a possibility that he was misled by his close aide.
A three-member probe panel is currently investigating the matter after the Ministry of External Affairs revealed that the e-mails were 'doctored' to add the UK-based A M Films name as a recommended company for car rentals and other services.
"I asked Darbari to show me the e-mails and he showed me those e-mails. It could be that I was misled. I am not a technocrat to know if they were genuine. The (probe) committee will look into all this and tell," he said.
"The Ministry gave me a different e-mail. I said I am not a technological expert. They didn't mention doctored or forged. They just said one line is different. Whether they were forged, we would know only after the inquiry," Kalmadi said.
Kalmadi, nonetheless, defended Darbari insisting that the tainted official had worked well while in office.
"Darbari has a lot of business to take care of but he has done his job. He is an efficient officer. He has been very helpful," he said.
"I trust all my officials. I have got 2,000 people working for me and I trust all of them. It was a tough decision to suspend," he said.
On why Darbari was kept on board in OC despite a tainted past, including a customs case, Kalmadi said he was sent on leave when the case initially came out but was taken back after he gave in writing that he was merely a witness in the matter.
"He was not suspended, he went on leave. He went for the inquiry and came back with a letter saying that he was called as a witness and nothing more than that. So he was taken back," he reasoned.
But Kalmadi said he would not protect Darbari him if he is found guilty in the QBR financial irregularities case.
"If I see some financial irregularieties, I am not going to protect one person. There is no letter which states that Darbari is a culprit in that (customs case). There is an inquiry going on and the moment the inquiry is over, I will tell you," he said.
Asked persistently why he was not taking the moral responsibility for the corruption charges, inclduing the ones levelled in a Central Vigilance Commission report, Kalmadi reckoned he could not be expected to own up for mistakes committed by others.
"I have 2000 people working under me, I don't see all the papers. Matters go to the Executive Board, where four officers from the government sit. Every single paisa has been passed by such committees," he explained.
"If I am involved then I would see. Once the Games are over CWGOC would be disbanded anyway so no question of me stepping aside," he said.
All India tennis Association chief Anil Khanna stepped down from the post of OC treasurer after his name cropped up in a controversy over the contracts awarded to a company in which his son is an employee. Asked if he was willing to take such moral responsibility and step aside, Kalmadi said, "Anil Khanna can afford to resign but I as chairman of CWGOC cannot. These Games are my baby, I have made promises to the Commonwealth Games Federation. I would have a tough time explaining to them that the Games are in trouble when I step down."
"I have got 34 functional areas to look after which is a mammoth task," he added.

Franky Speaking
Exactly a week after TIMES NOW expose on dubious money deals between the Organising Committee of the Commonwealth Games and UK based AM Films, six days after CWG boss Suresh Kalmadi threatened to sue TIMES NOW for our investigative report and one day...Watch TIMES NOW's Exclusive interview here
Posted by tony mariadass at 4:37 AM