The Sunway Mega Lanes must surely be a happy hunting bowling centre for Girls 15 and Under Masters champion, S. Nivashini, in the Milo International Junior All-Stars Bowling Championship.

Yesterday’s win was the third time Nivashini finished among the top three in the last ten days in the centre.

Then last Wednesday, in the Nine Pin Tap, which was the prelude to the All-Stars, Nivashini, finished second behind national youth bowler Hee Kar Yen.

And yesterday morning, Nivashini emerged champion in the 15&Under category pipping Johor’s Sharifah Nur Fatimah by a mere seven pins with her score of 1673 from eight games. 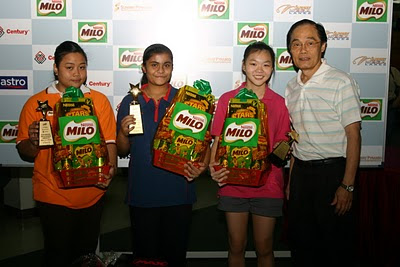 Nivashini said that indeed this has been a very lucky ten days for her.

“I have not won anything the whole year and all of sudden, I emerge tops in two events and runner-up in one,” said Nivashini who picked up the sports when she joined the bowling club in her primary school – SRK SS 19.

Nivashini has been competing in the SportsExcel Bowling circuit for the last two years, only competed in three legs as she was preparing for her PMR examinations.

“I was disappointed when I failed to make the Grand Finals this year from my points in three legs, but my win here certainly has made up for my disappointment,” said Nivashini who finished fifth in the SportsExcel Grand finals the year before.

Nivashini’s mother, Thilaga who was at hand to give her moral support said that her daughter has done well considering she only picked up the sports three years ago and was elated that she picked up three honours in ten days.

“I will be getting my PMR results on Dec 28 and I hope I will get good results to make it a memorable year end,” said Nivashini who uses a 14.2 pound ball and is a hook bowler.

“The win today has certainly boosted my confidence, as there were many good bowlers competing. I am looking forward to use this win as a launching pad for better things in the coming years,” said Nivashini who is also bowling in the Graded Masters category and is currently placed 13 (top 16 qualify for the Masters)

Singapore who had 12 bowlers out of 18 bowlers in the final, finished highest on third spot through Tracy See Wan Zhen who had a total of 1640.

A third Singaporean, Alexandar Tan Kee Hock had to share honours with Kuala Lumpur’s Qalif Adnor who tied with 1684.

Yesterday saw most of the foreign bowlers from Korea, Australia, Chinese Taipei, Thailand, Holland, Indonesia, India, Germany and Hong Kong take the lanes for their qualifiers.

Posted by tony mariadass at 8:11 PM