The Korean Mean Machines Have Arrived!

The Koreans have landed and made it clearly known yesterday morning, when Woo Song Young, fired a perfect game in the very first qualifying block of the day at 8am and in his very first game.

The 21-year-old Physical Education undergraduate from Uiduk University in Kyung Buk, had arrived the night before with a Korean contingent of 53 bowlers from high school, universities and national bowlers. 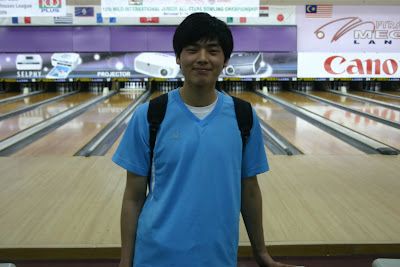 But he picked up the RM1,000 offered daily for a perfect game. He is the third bowler to have scored a perfect game in the championship since it started last Wednesday. National elite back-up bowler, Kang Bo Long was the first to fire the magical 300 last Wednesday, followed by national bower Esther Cheah on Tuesday.

Australia’s Keryn Delaney leads the singles standing with his score of 732, while Dion Alexander from Australia with a total of 728 is second and Michael Tsang from Hong Kong is third with his total score of 715.

Other Koreans who have made an impact include, Hong Hea Sol who leads in the Mixed Pool, Jeon Eun Hee in the Girls Overseas Pool, Kim Yeo Jin in the Girls Graded and Jeong Da Hea in the Girls singles.

Jeon Eun Hee, with her total score of 709, still fails to be top overall bowler, as Esther Tan and national elite bowler, Hee Kar Yen, are joint leaders in the Local Pool with their total 770.

With another day of qualifying today (Thursday) before finals on Friday, the scramble for total 44 places available for the Boys Masters and 36 for Girls is expected from both the local and foreign bowlers.

The overseas bowlers can qualify from the Overseas Pool where they are allocated 12 slots or from the Mixed Pool where there are 16 slots. The Local bowlers have 12 slots besides the Mixed pool slots. There will also be three places for the boys and two for girls under the Desperados category – those who have bowled five blocks and still have not qualified, are eligible to bowl in this category.

An exciting day is certainly on the cards today.

Posted by tony mariadass at 6:00 PM