Korea’s Kim Sun Woo was still smiling and his spirits up despite having missed pocketing RM50,000 for a perfect game by one pin and being pipped to first spot in the Boys Graded Masters final in Milo International Junior All-Stars Bowling at the Sunway Mega Lanes yesterday.

The 22-year-old undergraduate from UIDUK University from Kyung Buk city despite throwing a solid pocket ball saw pin 10 wobbling but failed to fall in his game 7 out the ten games bowled in the final.

Kim was the leader then and kept his position until game nine. However, in the final game, Kim saw fellow Korean, Choi Tae Seung pip him by 30 pins with his total pinfall of 2,403 to emerge champion to win RM 10,000. Kim had to settle for RM 4,000 only.

Nevertheless, Kim was hardly ruffled by the twist of luck and preferred to look on the brighter side saying that either he will try to make amends in the Boys Open finals today or All-Stars Classics, which is an Open event tomorrow, and Monday.

“The pressure got the better of me. With all the crowd rooting for me and the fact that I would win RM 50,000 for a final strike, saw my heart beating very fast,” said the ever-smiling Kim through an interpreter.

“I threw a good pocket shot, but I suppose luck was not with me and not fated to win the RM50,000.

“It was a costly miss, but life has to go on. I cannot brood over it. I have the Boys Open and Classics Open to bowl and I will just try to do better there,” said Kim with his positive approach. 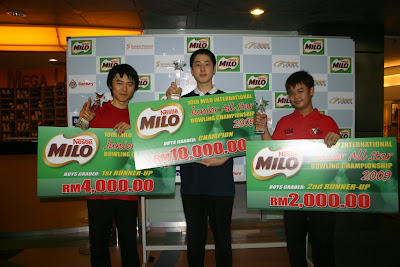 While the Koreans finish 1-2, Malacca’s 15-year-old Jason Syow Huay Tik saved the blushes for Malaysia, when he finished third with his 2,262.

The pint-sized Jason from Malacca High School, was among the three Malacca bowlers who had competed in this tournament with their parents assistance. The other two were Dinie Faliq and Kovaman Hairi.

However, the newly opened Melaka International Bowling Centre (MIBC) has come forward to support the three bowlers to subsidise subsiding their lane fees for training and training.

The trio did not have a coach and were only guided by their parents.

Indeed a remarkable feat and Jason’s performance has certainly opened the eyes of many of the talent they have and MIBC are the first to come forward to assist.

In the Girls Graded finals, it was an all-Korean affair with them taking the top five spots. 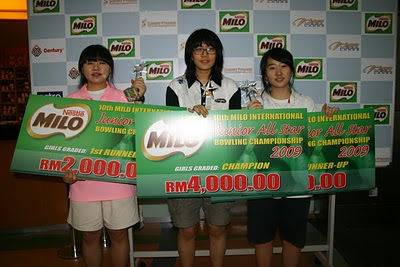 The highest finish by a Malaysian was Victoria Chin from Selangor who finished sixth with her total of 1969.

The Open Boys and Girls final will be bowled today with the winner for Boys winning RM30, 000 and the Girls winner taking home RM17,000

On Thursday night, another two bowlers bowled perfect games and shared the day’s RM1, 000 for the magical 300.

Till yesterday afternoon, seven perfect games have been achieved since the tournament started last Wednesday.

The first to achieve the feat was National elite bowler, Kang Bo Long on the first day of the competition, followed by Esther Cheah on Monday and Korea’s Woo Sang Young on Wednesday.

CURRENT LEADERS (at time of print):

Posted by tony mariadass at 6:28 PM