Just like the first to score the magical 300 in the championship, ’s Dilbir Singh on Tuesday evening, it was also Fatin’s very first perfect game of her five-year career.

The 20-year lass had the honour of firing the perfect game in her very first game of her first game in the championship – the singles.

However, Fatin has fired two unofficial perfect games whilst training with the national back-up squad at the Sunway Mega Lanes this year.

“It is a great feeling of having fired my first official game 300. I least expected it because it was first game in the championship, but the pins just kept falling frame after frame,” said an elated 20-year-old Fatin.

Fatin said that she hopes to finish among the top three here after her disappointment of failing to make the stepladders to be among the top six in the Milo International Junior All-Stars championship last week, when she finished eighth.

Fatin missed the cut by 52 pins to fourth placed Esther who went on to win the title, while fifth placed and defending champion, Sin Li Jane missed out by nine pins.

“It will be great to win the tournament at home, but it is going to be a tough challenge especially from the national bowlers. But I intend to give my best shot,” said Fatin who hails from Permatang Pauh. 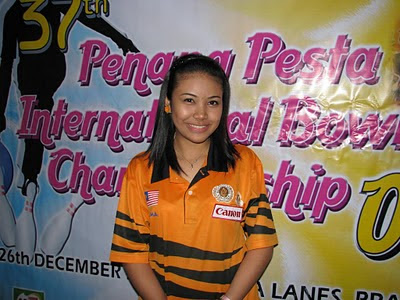 Fatin considers 2009 as a good year after having made a comeback after a year’s lay-off because of a freak accident.

Fatin hurt her left knee in her hotel room in in December 2007, where she fell because of earthquake tremors. She was competing in the Ancol Open championship then.

“I hurt my left when I fell because of the tremor during the earthquake. The knee swelled up, but I continued to bowl until a few months later when I saw a orthopedic surgeon, who told me that I had damaged my knee and needed surgery to replace my knee,” related Fatin.

Since her comeback, Fatin has competed in international championship and winning the Open in June was the best thing that happened to me since my return as it underlined that she was ready for international competitions.

Fatin was also a member of the national youth team to the Asian Indoor Games in last month where she won silver in the doubles and a bronze in the team event.

“It has been smooth sailing since my return after the long lay off and I hope I will be able to break into the national team soon,” said Fatin.

Meanwhile, the Malaysian men and women bowlers have lined themselves well to keep it a Malaysian affair in the championship’s Open category.

While the women bowlers were expected to be in the running, the men who have been having a poor run lately, have stepped up to be counted for the final tomorrow morning.

Besides defending champion, Zulmazran Zulkilfi, who earned an automatic berth carrying the Malaysian men’s challenge, among the remaining 27 qualifiers for the final rounds currently include, leaders among the local bowlers, national back-up bowler, Mohd Noer Said and local and national bowler, Aaron Kong who are tied at 966. Then there is Zaid Izlan (922), overnight leader Alex Liew (921), Aris Ardilla Santosoh and Syafiq Ridhwan tied on 898.

In addition, the fact that the top four bowlers’ total scores exceed the highest among the overseas qualifiers is another indication that earlier fear that the Koreans might dominate the championship not be a reality.

However, the battle will only begin today where the 28 will bowl 10 games for the top 12 bowlers to qualify for final rounds tomorrow morning, where the scores from the earlier round will be carried forward.

In the women’s category, newly crowned All Star Classic champion, Siti Safiyah Amriah, leads the pack with her total of 962, while back-up bowlers Syakira Yeoh and Tengku Emanina are second and third with their scores of 895 and 890.

Shalin Zulkilfi is fourth with 888, Fatin is fifth with her score of 875.

With so many Malaysian women bowlers in the race together with defending champion Sharon Koh, all indications are that one of them will wrest the title.

“This win is a surprise. I had never expected to win after having failed for the last five years. I suppose perseverance pays in the end,” said the Form 4 student from SMK Gunung Rapat, Tapah.

In the Girls finals, it was an all Singaporean affair with Tan Yan Ling emerging champions with her total of 1,769, Stacy Lian second (1,572) and Oriana Tay third (1551).

The Men and Women’s Graded finals will be held tonight.

Posted by tony mariadass at 5:48 AM