Zandra set to create a record

Selangor’s national bowler, Zandra Aziela Ibrahim Hakimi could well be setting a record of sorts to become the first women bowler to win all four medals at stake in the Interstate Bowling Championship.

Zandra, who won the singles gold medal on Monday, posted a 1366 score for six games, while Siti Safiyah had 1307 for a combined total of 2673 to win the gold medal. 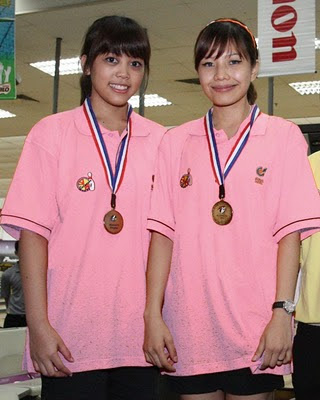 Two other national bowlers, Sharon Koh and Wendy Chai representing Kuala Lumpur won the silver medal with their combined total of 2531, while the second pair from KL – Hee Kar Yen and Cheryl Cheong Pui Yee – won the bronze medal with their total of 2509.

Zandra, currently also leads in the All-events with her total of 2748 from her singles and doubles event, while Siti Safiyah is second 69 pins behind Zandra. In third spot is Hee with 2612.

Today in the team event, if Zandra picks up her third gold medal, the All Events gold medal will be purely academic. Zandra will be teaming up with Siti, Zatil Iman and Illi Syazana had a good chance to bag the gold medal.

Zatil and Illi who finished sixth in the doubles yesterday, are placed seventh and eighth, in the All Events.

However, Zatil and her teammates will have to overcome the strong challenge from the KL team of Sharon, Wendy, Hee and Cheryl.

“She is now bowling at a faster pace and that has helped her a great deal. If she keeps up her form, I will not surprised if she bags all four gold medals,” said Holloway.

However, Holloway hoped that Zandra will not take her early success in the year for granted.

“My only concern is that Zandra might get complacent after her performance here. I hope she will take this performance to further motivate herself to do better.”

Just like Zandra, the 19-year-old college student, bagged her second gold medal when she won the Girls Doubles partnering Nur Umirah Raduan (left)( with a total score of  2,514. 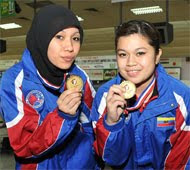 Selangor’s pair of Dina Nurnadia and Nor Amila had a total of 2419 to win the silver, while the bronze medal was won by Sarawak’s duo of Jackelyn Ng and Nurafidza Mohd Amran with their 2404.

Nur Diana, also leads in the All-Events with a total of 2517, while her teammate, Nur Umirah is second with 2466 and Sabah’s Steffira Greater is third with her total of 2426.

Nur Diana and Nur Umirah will partner Radin Nur Najwa and Hanan Fateha in the team event and will certainly start as favourties against the more fancied Selangor.  Radin and Hanan are placed 5th and 6th in the All-Events, while Selangor’s highest placed is Nor Amilia who is in 7th spot.

In the Boys doubles, Sabah’s Ozzer Othaman (right) had sweet revenge over Melaka’s young talent, Jason Syow, when the former went to win the gold medal teaming up with Tan Chien Nan (left).

Jason, who had won the singles gold medal, had to settle for the silver pairing with M. Syafiq Hashim.
Infact, the Melaka pair had to make a concerted effort to move from their third spot with a game to go, to win the silver, when Jason scored 212 and Syafiq had 247. That pushed Selangor’s pair of Tg Muhd Yasser and Muhd Amirul who had fired a 204 and 209 in the final game, to settle for the bronze. 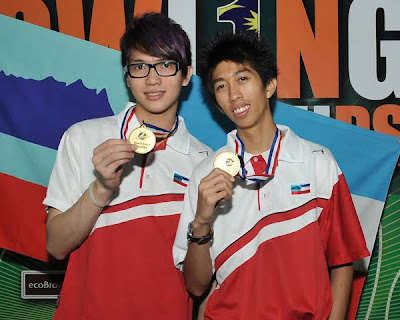 The winning pair from Sabah had 2647 to win their first medal, while the Melaka duo had 2520 and Selangor totaled 2469.

Ozzer also leads in the Boys All-Events with a total of 2698, while Jason is second with his total of 2586. Selangor’s Mud Amirul is in third spot with his 2550.

The team events today, will end the Interstate championship.  A battle keen is on the cards, with Kuala Lumpur looking set to upstage the perennial champions, Selangor.

Posted by tony mariadass at 6:10 PM