The Land Below The Wind Rises


Sabah Tenpin Bowling Association’s (STBA) emphasis on development saw them emerge as the new force among youth bowling in the Interstate Bowling championship which ended yesterday.

Yesterday, Sabah bagged another two gold medals in the Youth category for a total of three – the highest achieved in the championship.

Sabah’s toast of the day was Ozzer Othaman, who won his second gold medal when he emerged, tops in the Boys All-events with his 3783 from three events and 12 games for an average of 210.

Ozzer who had turned 19 on Jan 9, had on Tuesday won his first gold medal in the doubles event partnering Tan Chien Nan.

Ozzer a Form Five student of SMK Sanzac in Kota Kinabalu, had also won the silver medal in the singles.

Steffira, also won her second medal yesterday, when she won the bronze in the Girls All-events with her 3583.

Kuala Lumpur finished 1-2 in the Girls All-Events with their aces Nur Diana Hussin and Nur Umirah Raduan winning the gold and silver respectively with their totals of 3652 and 3632.

For Nur Diana it was her third gold medal after having won the singles and doubles earlier. She missed out a fourth, when the Selangor team finished fourth in the team event.


For Nur Umirah on the other hand, it was her second gold medal after having partnered Diana to win the doubles gold. 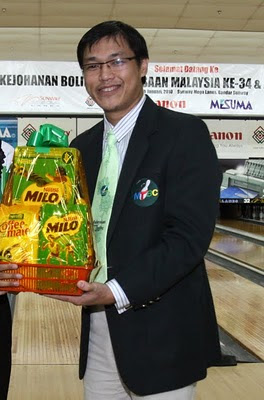 “It was a five-year development programme started when the new team of management took over STBA in 2006 under the leadership of Mohd Ayub Dahlan (below),” said Chok. 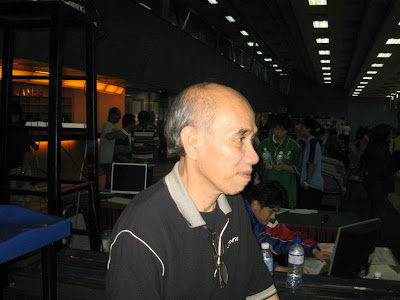 “Sadly the A development programme was discontinued because of lack of funds after the second year. The girls team who won the team event today are all from that programme.

“But we continued with the Youth Development under coach Ricky Loh despite funds for the Sukan Teras also cut after the second year.”

Chok said that Mohd Ayub had set a target of 2010 for Sabah to make their mark, but they had already started to make waves in the 2008 Sukma Games in Terengganu where they were overall champions with a haul of five gold, two silver and two bronze.

“And today, the performance of our boys and girls in the Interstate is the best ever in the history of the competition.”

Without doubt, Sabah will once again the force to be reckoned in the coming Sukma Games in Melaka.

The dedication of the STBA is unquestionable for president, Mohd Ayub, the assistant director of Sabah’s Public Services Department and newly elected vice-president Abdul Rahim Abdul Hussein, have been with the team from day one from morning till the last ball is thrown by their bowlers late at night.

Chok said that Mohd Ayub in his five years term has made it a point to be present at every championship Sabah competes.

“He is avid bowler who bowls every night and supports the game with passion. His dedication has certainly been a key factor for Sabah’s rise.”

Sarawak is another team to be noted for the development programme and their rise in the sports.

Former national bowler, Jackson Ting, handles the development in Sarawak and he is certainly make waves.

Although Sarawak did not win a gold medal in the championship, they won three silvers and three bronze medals. They will indeed be a State to lookout for.

In the Boys Team event, there was another surprise in the Johor team winning the gold with their team comprising Chan Wei Siang, Syed Mohd Hafiz, Mohd Faizal Rahmat and Mohd Haziq Shali with their total of 4943.

Sarawak won  the silver with a total of 4800, while Melaka won the bronze.

The rise of teams like Sabah, Sarawak, Melaka and Johor in the youth category to outshine perennial strong holders Selangor and Kuala Lumpur, certainly augurs well for the game.

Posted by tony mariadass at 8:02 AM