Your source of Philippine community news
Friday, May 21, 2010 at 5:55:26 p.m.
THE X-Mail Veteran football club (FC), will be making some contributions to the soccer team of Handumanan Elementary School on Monday after the end of the 2nd Philippines-Malaysia International Veteran Soccer Festival in Bacolod City on May 29-30.
The X-Mail FC is no newcomers to Bacolod City, having come here regularly in the 90s to compete in the Philippines Cup soccer tournament.
Now, this team from the Malay Mail newspaper return to continue their longstanding friendship with Bacolod City, as veteran soccer players. 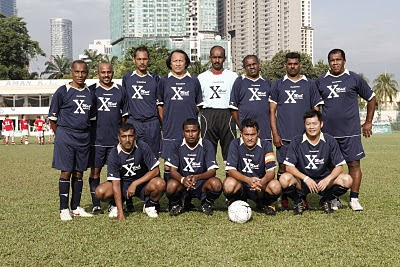 Led by team leader and coach Tony Mariadass, who was instrumental in reviving the relationship between Bacolod City and X-Mail team last year, when the inaugural Philippines-Malaysian veteran soccer tournament was started, has always had a soft spot for assisting the development of soccer in Bacolod City.
Last year, the team had also made a similar presentation to Handumanan Elementary School at the Panaad Stadium during the tournament, through the assistance of former Philippines Football Association secretary-general, Edward Magalona, a good friend of Mariadass, when they competed in last year's tournament. 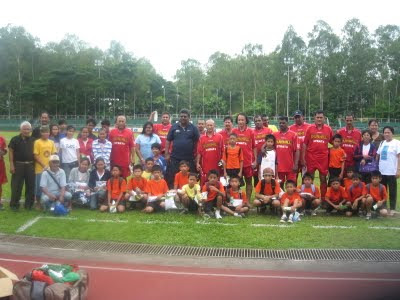 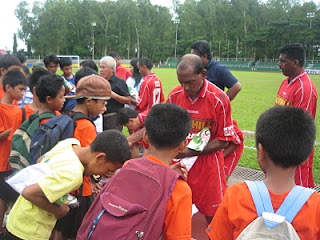 Last year's presentation to Handumanan Elementary School at the Panaad Stadium
Among the contributions they made included jerseys, soccer balls and donations from Milo which included T-Shirts and Milo drink sachets.
This year, X-Mail will go to the school to make the presentation which will include contributions from Milo and Bata, who have graciously sponsored shoes for the poor children.
"This is our small contribution to the development of soccer in Bacolod City especially in assisting poor children who love the game of soccer but are hampered to progress because of lack of equipment because they cannot afford it," said Mariadass
"It may be a small contribution, but we will return happy that we have made some contribution to help the poor children enjoy the game of soccer better.
"We thank sponsors Milo and Bata, who are leading sponsors and contributors to sports in Malaysia, especially at the grassroots level, to have come forward to assist us in realizing our hopes to help the children in Bacolod City."
The entire X-Mail team will be present at a simple presentation ceremony at 9am on May 31 at the Handumanan Elementary School campus. (HCV)

Published in the Sun.Star Bacolod newspaper on May 17, 2010. 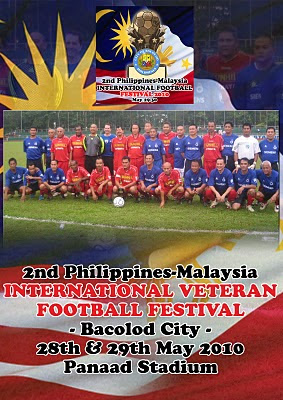 Posted by tony mariadass at 8:43 PM