IF only the passion and commitment of veteran soccer players is shown by the current soccer players, Malaysian soccer would be higher ranked in the world.
Veteran soccer tournaments are fast on the rise in the country and the number of veteran players and teams around the country is amazing.
Most of these tournaments cater for players who are above 40 years old, but some tournaments allow two or three players who are 35-years and above to add some pace to the game.
Penang Sports Club organised their 11th edition of the  PSC- Carlsberg International Soccer 7's over the weekend and what a hit it was.
There were 40 teams competing`and foreign teams participating, which included teams from Singapore, Indonesia, Australia, Brunei, Hong Kong and the Philippines.
The tournament was for two categories - the Veterans ( 40 and above and three players 36 and above) and Masters (45 and above).
The tournament not only saw some great soccer being played with many teams defying their age setting a pace which youngsters might be put to shame, but it was also a congregation of some great ex-internationals from Malaysia and Singapore.
While some ex-internationals played, others came as managers or coaches, while some just came to lend support to the tournament and catch up with old friends and teammates.
Organising chairman, Dr S. Shanker and his team did an excellent job managing the tournament without any hitches and creating a carnival atmosphere with the many tents for the teams to rest, food stalls and even a massage corner!
With former Penang FA secretary, Datuk Mohd Junid Mohd Noor as the tournament director, former national and Penang player, C. Nadarajan as the technical director and S. Pathumanathan, a pioneer member of the organising committee since 2000 as the advisor, Dr Shanker could not have asked for more able hands to assist him to make the tournament a success.
The tournament played in the vast PSC grounds, saw three fields (not full sized pitches) being used and each match started to the second of the time on the fixtures.
Despite the blazing heat and born dry and hard pitches - no thanks to the hot weather - every one had fun and played some brilliant soccer.
Among the familiar faces on the two days were Santokh Singh, Isa Bakar, V. Kalimuthu, Chan Sze Onn, A. Rukumaran, S. Muraliraj, Jelani Wilastra, Scott Ollerenshaw, Bobby Chua, Abbas Saad, R. Suriamurthi, V. Sundramoorthy, A. Ellangovan, V. Suresh, A. Jayakanthan and Chan Kok Heng to name a few.
After two days of battling it out, it was Singapore's Jurong Western with the likes of Abbas and Sundram who defeated Indonesia's Kwarta Football Club 4-0 in the Veterans final.
Abbas (below) score two goals to show that he may have lost his hair, but not his soccer touches! 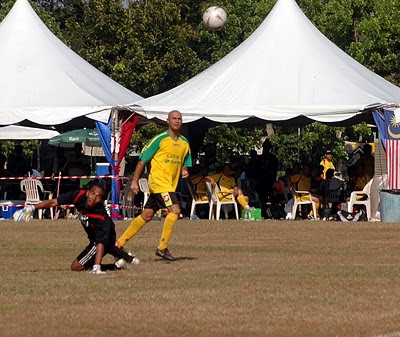 It was Jurong Western's (below) first ever win in the championship and they pocketed RM1,500 and took home the trophy. 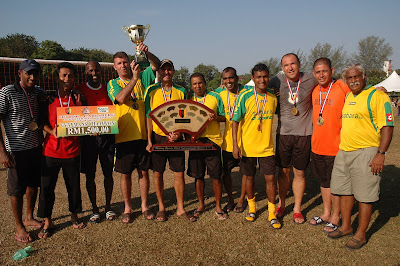 In the Masters final,  Johor's Melodi Jaya Football Club (below), with the services
of Singapore's ex-internationals R. Suriamurthi, Jelani Wilastra and Malaysia's ex-double international(soccer and hockey), V. Kalimuthu, who is 63 years-old, defeated Hong Kong All Stars 2-1, to lift the Challenge Trophy.
They took home RM1,000 and the trophy. 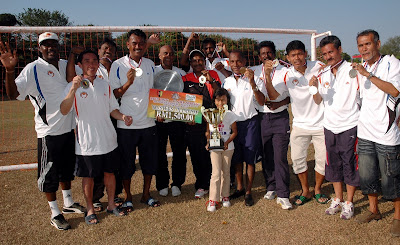 It's all about passion and love for the game that keeps the veteran going Tony.Well done PSC.
Wonder what are being taught for the current sports generation???

Thanks for bringing this up Tony. I now live in the US and had no access to this tournament but it was good to see some old faces.

Bro, Brunei also field few x international players such as Liew Chuan Fue, Azamanuddin Hj Gillen, Suni Mat Jerah & Mohd Ali Momin (both 1999 M'sia Cup Winner). Hope we can meet next year or at any veteran tournament - from old friend (but not to closed during 83-87, maybe you don't remember me, I'm Jabar Isnin, during that time I work for Harian Nasional and after that moved to Arena Bolasepak) bye

Dear Jabar Isnin, sorry for the omission but please be assured it was not intentional. Thanks for the input. Looking forward to meeting you the next time around. In the meantime, if your team is interested to compete in a veteran soccer tournament in Bacolod City, Philippines on May 29 and 30, please get in touch with me at: tmdass@gmail.com
But it has to be quick because I have to submit the names of the teams competing by the end of the month.
Cheers and thanks again!