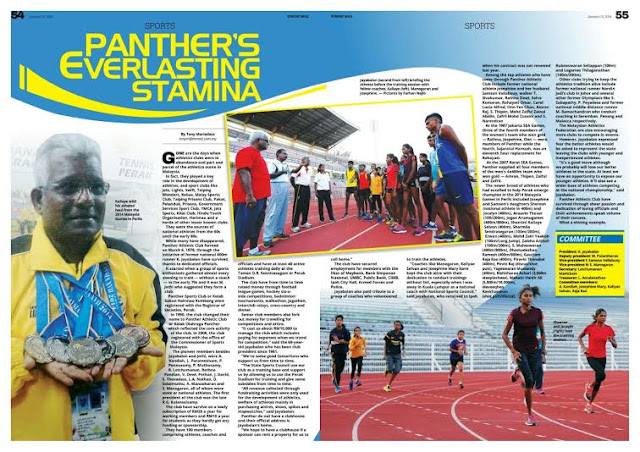 Panther Athletic Club in Ipoh is among the few athletics club who have stood against time to still remain relevant and active.
Gone are the days when athletics clubs were in abundance and was part and parcel of the athletics scene of Malaysia.
In fact, athletics clubs played a key role in the development of athletes and the sport clubs like Jets, Lights, Swift, Taiping Wonders, Kebas, Malay Sports Club, Taiping Prisons Club, Pakat, Pelanduk, Prisons, Government Services Sport Club, YMCA, Jets Sports, Kilat Club, Hindu Youth Organisation (HYO), Harimau and a horde of other lesser known clubs, were the sources of athletes for the nation in 60s, 70s and early 80s.
But while many clubs have disappeared over time, Panther formed on 6th March 1978, through the initiative of former national 400m runner K. Jayabalan, has managed to remain in existence through dedicated athletics officials who have the passion for the sport.
What started off as a just a group of sports enthusiast, merely gathering almost every evening for the purpose of training and self-satisfaction without any coach in the early 70s, Panther Athletics Club has become an iconic club who have produced a fair share of top athletes over the years.
It was a Mr M. Jothi who suggested to form a club and so was Panther Sports Club ir Kelab Sukan Hairmau Kumbang was born and registered with the Registrar of Societies, Perak. 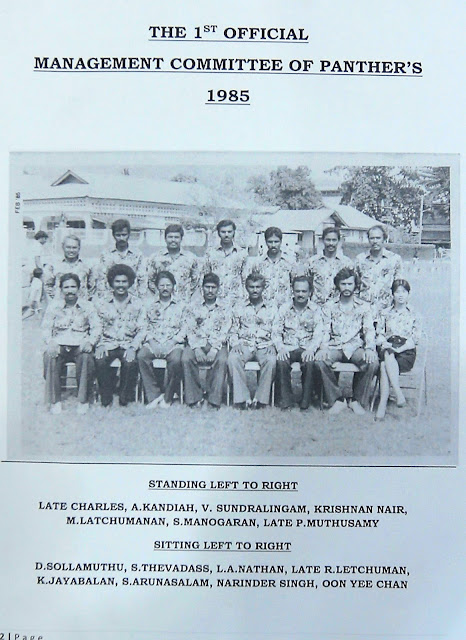 In early 1990, the club changed its name to Panyher Athletic Club or Kelab Olahraga Panther which reflected the core activity of the club. In 2008 the club officially registered with the office of the Commissioner of Sports Malaysia.
The pioneer members behind the formation of the club besides Jayabalan and Jothi, were A. Kandiah, L. Paramesivam, P. Ponnusamy, P. Muthusamy, R. Letchumanan, Rethna Pandian, V. Dewi, Pethan, J. David, S. Thevadass, L.A. Nathan, D. Solaimuthu, A. Manaoharan and S. Manogaran all of whom were state or national athletes. The first president of the club was the late R. G. Kolansaisamy.
And that the club has managed to survive without much funding or sponsorship, but merely on low subscription where working members pay RM20 a year and students RM10 per year.
The club has about 100 members comprising athletes, coaches and officials, at have at least 40 active athletes training daily at the Taman D. R. Seenivasagam or the Perak Stadium. 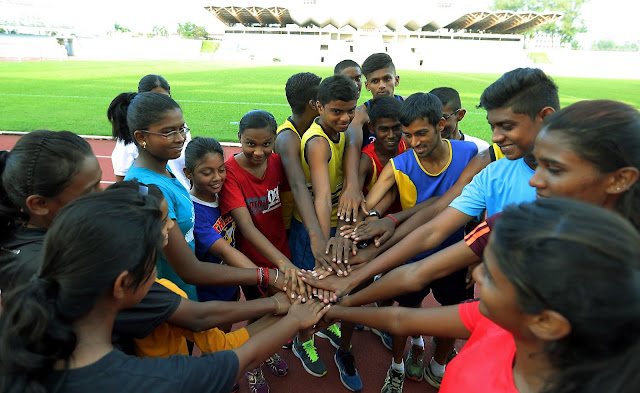 The club has from time to time raised money through football league games, hockey 6-a-side, badminton tournaments, walkathon, jogathon, inter-club relays, cross-country and dinner.
Senior club members also fork out money for travelling for competitions and purchase of attire.
“It cost us about RM10,000 to manage the club which includes playing for travelling to competitions, attire, drinks during training and some pocket allowance, lodging and food expenses when we travel for competition,” said the 69-year-old Jayabalan who is the current president of the club from 1981.
“We also have some good Samaritans who support the club from time to time.
“We also have to thank the State Sports Council who use our club as a training base and support us whenever possible by allowing us to use the Perak Stadium for training and give some subsidies from time to time.
“All revenue collected through fund raising activities were only used for the development of athletics, welfare of athletes mainly in purchasing attires, shoes, spikes and stop watched,” attested Jayabalan. 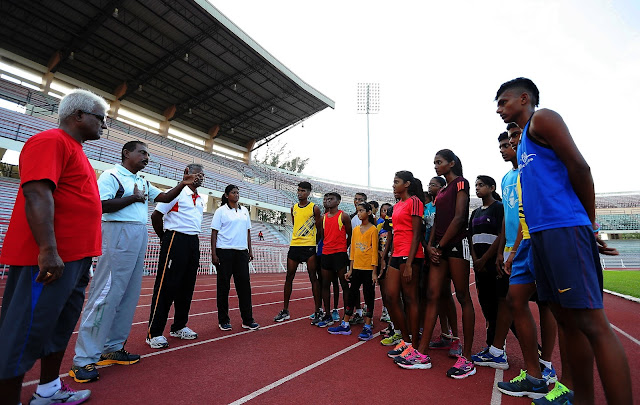 Panther Club does not have a clubhouse and its official address is Jayabalan’s home address.
“We hope to have a club house in time to come and hope a sponsor can come forward to rent at least a house to call our home.”
The club also has played its part in securing employment for its members with employers like Malayan Banking, Bank Simpanan Nasional, UMBC, Public Bank, CIMB, Ipoh City Hall, Armed Forces and Police.
Jayabalan also paid tribute to a group of coaches with their dedicated services to have kept the club alive.
“Volunteer coaches like Manogaran, Kaliyae Selvan and Josephine Mary have kept the club alive with their dedication to conduct trainings without fail, especially when I was away in Kuala Lumpur as one of the national coach with National Sports Council,” said Jayabalan whose contract was not renewed last year and has since returned to be involved fulltime with the club. 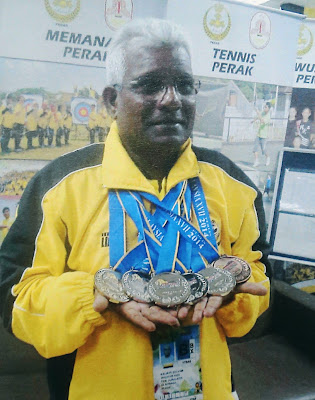 Among the top athletes who have come through the Panther Club include former national athlete Josephine and her husband Samson Vallabouy, walker T. Sivakumar, 400m runner Rathna Dewi, Selva Kumaran, Rohayati Omar, Carol Lucia Alfred, Onn Yee Chan, Amran Raj, S. Thipen, by Mohd Zaiful Zainal Abidin, Zafril Mohd Zusaini and S. Narendran
At the 1987 Jakarta Sea Games the 4x400m women relay quartet won gold for the country had all four runners (Rathna, Jospehine, Oon and Rohayati) from Panthers Club but Rohyati was replaced by sprinter Sajaratul Hamzah at the eleventh hour because of injury. At the 2007 Korat Sea Games the men’s quartet (Amran, Thipen, Zaiful and Zafril) all from the club also won the 4 X 400m gold medal. That were one of the many crowning achievements of the club.
The newer breed of athletes who had excelled to help Perak emerge champion in the 2014 Malaysia Games in Perlis include Josephine and Samson’s daughters Shereen (national athlete) and Jocelyn (400m), 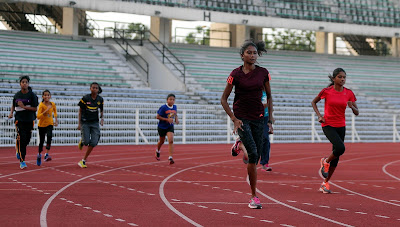 Araavin Thevar 100/200m), Jegan Arumugamm(400m/800m), Shantini Kaliaye Selvan (400m), Sharmila Sendrasegaran (100m/200m), Ezwan (400m), Mohd Zairi Yaakob (100m/Long Jump), Zaleha Aziziah (100m/200m), S. Maheswaran (400m/800m), Dhamadeshan Rameshm(400m/800m), Gauttam Raja Rao (400m), Piravin Thanabal (400m), Pirvin Raj (discus/shot putt), Yogeswaran Muniandy (400m), Rishitharan Achari (3,000m steeplechase), Mahatir Haidir Ali (5,000m/10,000m), Meveeqhen Ravichandran (shot putt/discus). Rubneswaran Sellappan (100m) and Logames Thilaganathan (100m/200m).
Indeed Panther Club are among the few clubs who have kept the athletics club tradition alive. Others include former national runner Nordin Jadi’s athletics club in Johor and several other former Olympian athletes like S. Sabapathy, P. Peyadesa and former national middle distance runner M. Ramachandran who conduct athletics coaching in Seremban, Penang and Malacca respectively.
That the Malaysian Athletics Federation  (MAF) recently in move to encourage more club based athletics decided to allow clubs to compete as an clubs to be established.
However, Jayabalan expressed his fear that the clubs better athletes will be asked to represent the state leaving the clubs with the younger and inexperienced athletes.
“But still it is a good move on the part of MAF and at although we probably will lose our better athletes to the State, at least we have an opportunity to expose our younger athletes. It will also see a wider base of athletes competing at the national championship,” said Jayabalan.
Panther Athletic Club is indeed a shining example of a club who have survived through sheer passion and dedication of athletics loving officials and their records of achievement speaks volume of their success.

Posted by tony mariadass at 6:57 AM