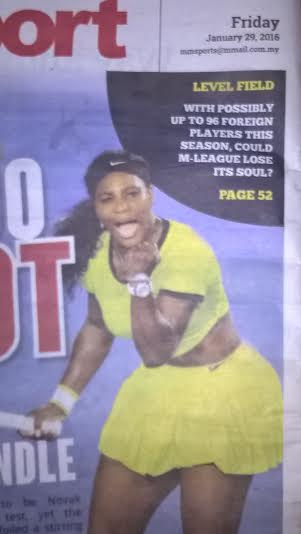 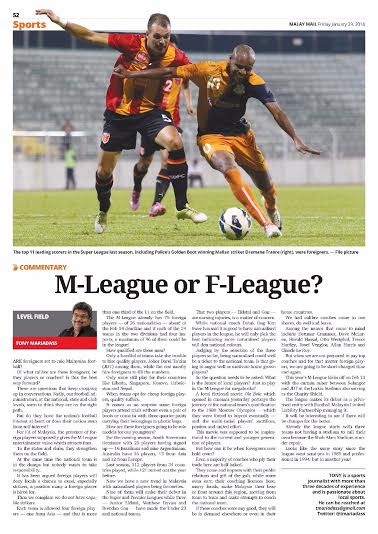 Are foreigners going to rule Malaysian football?
Of what calibre are these foreigners, be they players or coaches? Is this the best way forward for local football?
These are the questions that keep cropping up in conversations. Sadly, our football administrators, at national, state and club levels, seem to think they are on the right path.
But do they have the nation's football at heart or does their stand stem from self-interest? The answer is obvious.
For the FA of Malaysia, the presence of foreigners supposedly gives the M-League entertainment value, thus attracting fans.
To the states and clubs, foreigners strengthen their teams in their quest for glory at all cost.
Meanwhile, the national team is in the doldrums but nobody wants to take the blame for it, especially the parties concerned.
It has been argued over and over again that the presence of foreign players will deny the locals of a chance to excel, especially as strikers, a position for which most foreign players are hired.
Then we complain that we do not have capable local strikers.
Each team is allowed four foreign players – one must be from Asia – and that is more than one-third of the eleven players on the field.
The M-League already has 75 foreign players – 26 nationalities - ahead of the February 14 deadline and if each of the 24 teams in the two divisions allowed four imported players, a maximum of 96 of them could be playing in the league!
The question is, how qualified are these foreigners?
Only a handful of teams take the trouble to hire quality players, among which is Johor Darul Ta’zim (JDT), while the rest mostly hire foreign players to fill the quota and because their resources are limited.
Only some of the foreigners still play for their countries like Liberia, Singapore, Kosovo, Uzbekistan, Pakistan and Nepal.
When many teams opt for foreign players who come cheap and are floating around in this region, naturally the quality suffers.
Some even hire foreign players who were ‘problem boys’ in the M-League when playing for other teams, such as abusing the referees and displaying violent behaviour. A few were even suspended by FAM!
It comes as no surprise that foreign players who attend the trials do not even have a pair of boots or come in three-quarter pants carrying plastic bags.
Some have moved from to team to team, as many as four times!
How are these foreigners going to be examples for our young players?
For the coming season, South American players are set to rule with 25 players having signed up – 16 Brazilians and nine Argentines. Australia has 16 players playing their trade here, 13 from Asia and 12 from Europe.

Last season, 112 players from 34 countries played, while 121 turned out in 2014.
Now we have a new trend in Malaysia with naturalised players being the favour.
Nine naturalised players will make their debut in the Super and Premier League while three – Junior Eldstal, Matthew Davies and Brendan Gan - made their debut the previous season and have made the Under-23 and national team. That two players – Eldstal and Gan – are carrying injuries, is a matter to be concerned over.
While national coach Datuk Ong Kim Swee has come out to say while it is good to have naturalised players in the league, he will only pick who impress, everything indicates that more naturalised players will don national colours.
Judging by the selection of the three players so far, being naturalised could well be a ticket to the national team. Is that going to augur well or motivate the local players?
Question needs to be asked, what is the future of local players? Just to play in the M-league and earn big bucks?
The local fictional movie Ola Bola which opened in cinemas yesterday portrays the journey of the national team’s qualification to the 1980 Moscow Olympics – which the team boycotted eventually – and the local players’ sacrifices, passion, united effort and of a multi-racial team.
This movie was supposed to be inspirational to the current and younger generation of players. But how can it be when foreigners hold court in the current situation.
Even coaches who ply their trade in Malaysia, a majority of them are half-baked coaches. They come here and impress with their excellent public relation and gift to speak, while some even earn their coaching licences here, marry locals, make Malaysia their base or float around this region, move from team to team and even attempt to coach the national team.
If these coaches were all that good, they will be in demand elsewhere or even in their home countries.
We have had some calibre coaches who have come to our shores done well and left because they were in demand. Among the names that come to my mind include the Dettmar Crammer, Dave McLaren, Harold Hassal, Otto Westphal, Trevor Hartley, Dr Josef Venglos, Allan Harris and Claude Le Roy.
But when we are not prepared to pay to hire top coaches and for the matter foreign players, we are going to be short-changed time and again.
The 2016 M-League kicks offs on Feb 13 in the curtain raiser with Selangor taking on JDT at the Larkin Stadium which also serves as the Sultan Ahmad Shah Cup - Charity Shield.
The League makes its debut as a privatised entity with Football Malaysia Limited Liability Partnership (FMLLP) managing it and it will be interesting to see whether there is going to be a significant changes for the better of the League.
Already the League starts with three teams not having a home stadium because the Shah Alam Stadium is under repairs.
Looks like the same story since the League went Semi-Pro in 1989 and professional in 1994, but in another year!
​The script does not look to change.​

TONY MARIADASS is a sports
journalist with more than
three decades of experience
and is passionate about
local sports.
He can be reached at
tmariadass@gmail.com
Twitter: @tmariadass​​
Posted by tony mariadass at 7:16 AM