He aint heavy, he is my brother!

updated: pixs at the grave below. 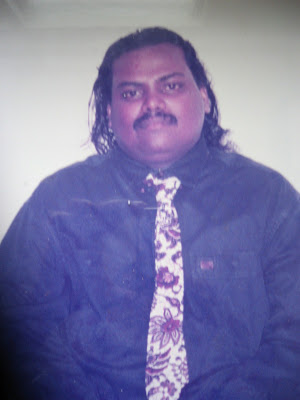 It will be 16 years tomorrow since my brother, Jeyaprakash, passed away after a motorcycle accident on Sept 11, 1993, along 5th mile Jalan Kelang Lama.

He would have been 46 years-old on Nov 7 if he was alive.

I am the eldest in the family of five and he is the second of four brothers and a sister.

Until today, I cannot believe that he is gone. He was too young to have left us and in such a sudden manner. He was a victim of a hit-and-run case. He lay in coma for three days before he passed away.

Somehow, I still blame myself for his death because months before he met the accident, my late mother, sister, Jeyaprakash and my youngest brother Jesu, who were all staying with me, moved out to Puchong.

Jay Jay as Jeyaprakash was affectionately known among his friends, was working at a lawyer’s firm in the day time and at night was deejaying at a club in the city. 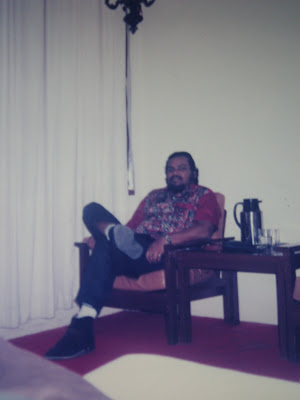 He used to finish late normally on the weekends and when he was staying with me at 3rd mile Old Klang road, he would come back as it was close to the city.

But since it was a long ride home to Puchong and it was not all the safe to ride home in the wee hours of the morning, he would sleep at his club and return early in the morning.

It was on his return home that Sunday morning, when he met in the accident near Overseas Union Garden bus stop. It was rumored that a mini bus hit him, but it was never confirmed.

Although, Universiti Hospital was just around the corner from where I was, by the time I reached the Emergency Room, he was already transferred to the General Hospital.

When I reached the General Hospital, he was in the ICU and in a coma. We all prayed that he would come out of it and be back home soon. But it never happened and on Sept. 13th 1993 in the afternoon, I got a call from the hospital to come immediately, as my brother's condition was serious.

I rushed to the hospital with my late father and Jesu, and when I walked into the ICU room, my worst fear came true when I saw his face covered.

I still think that if Chinna (that's what the family call him because being second in the family he was known as Chinnanna - small brother) would be alive today if he had still stayed with me as he would have come home after his work.
Many have tried to console me that it was fate and it was his time to go, but I still can't bring myself to believe that.
This being the fasting month I remember him even more because he used to fast during the whole month because he had many Muslim friends.

He used to say, “How can I eat when all my Muslim friends are fasting. I will fast with them. Besides, I will lose my weight too!”

In addition, my mother would even get up to prepare him sahor and have a meal all prepared for him when he returns home to break fast.

There were many times when my sister, Kasthury and mother, would fast with him because they could not stand him fasting alone. 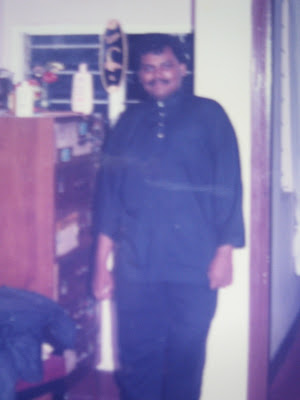 Moreover, when Hari Raya came, he would ride off in his bike to his friends house in kampongs and spend a few days with them. He was a shining example of a true Malaysian!

For the record, Jay Jay, is not a Muslim, but my two other brothers, Jesu Adam and Johan Jothi, are both converts. Johan has been working in the Middle East for more that 20 years now.

Every year without fail, I would put a memoriam in The New Straits Times in memory of him. However, this year I did not because of financial difficulties since I was laid off work in February.
Now that I have started this blog, I decided to pay tribute to Jay Jay here and at least in this blog, I can finally say what has been in my heart all this while.

Chinna, was affectionate about football as I am. He used to follow The Malay Mail team for matches wherever possible and was my No 1 supporter as the coach and manager of the team.

He was always there to help prepare the drinks, pump the balls and carry the soiled jerseys. He was a confidant to many of my players and sometimes I would hear their occasional woes through him and tried my level best to address them.
He was like a member of the team and was there to share one of my proudest moments in the game when Malay Mail defeated the star-studded City Hall team by a solitary goal scored by Daniel Sinnappah to win the KLFA Dunhill Cup in 1998.
City Hall SC had the likes of Rashid Hassan, Tang Siew Seng, Razip Ismail, Mat Zan Mat Aris, Saidin Osman, Hashim Marman to name a few. 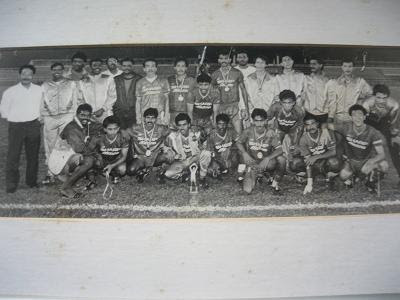 THE VICTORIOUS TEAM.......Jay Jay (standing sixth from the left) with the then known Sharp Malay Mail team who won the KLFA Dunhill Cup beating City Hall FC at the Bandar Tun Razak Stadium in 1998. Squatting fifth from the right is the match winner...Daniel Sinappah. Rocky Bru is on the far right. This team had the likes of K. Kannan, See Kim Seng, M. Pavalamani. V. Suresh and S. Tamilarasan, all who had played in the M-League.

As brothers, we were close despite the five years difference in age. But like in all families, we have our fair share of arguments too. And he being a Scorpion, was strong headed and there were times where we had screaming battles.

But today, I wished all that did not happen and I can go back in time to change all that. I don’t know if Chinna will hear me, but from the bottom of my heart, I want to apologise for all those heated moments.

I know it is too late to change things, and I wished I could have done more for him and that he was still around for me to have those arguments all out of love all over again.

However, it is impossible for now. I hope to meet you one day and personally apologise and make up for all the lost time.

I miss him very much and so does my sister and brothers. My parents have joined him and we are left here all alone.

We will be visiting his grave in Meru, Klang tomorrow morning to pay respect. My parents graves are next to his and it will indeed be a touching moment.

Chinna's grave and on the background where my parents were laid to rest. 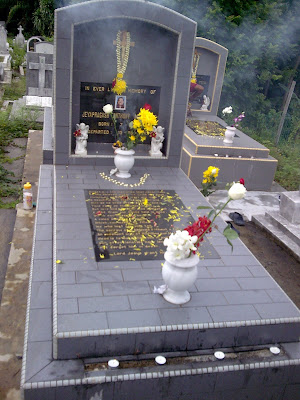 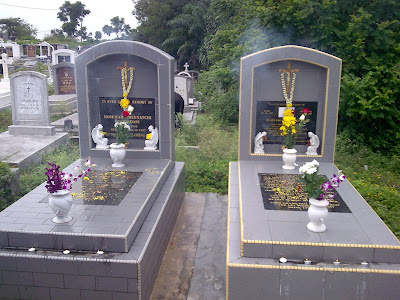 To his friends and relatives, whom he might have touched in one way or other, please remember him in your prayers.

Lord grant Jeyaprakash eternal rest and let perpetual light shine upon him. May he rest in peace and God Bless him forever!

Posted by tony mariadass at 2:35 PM

Tony, I know you are a good and very affectionate brother- but please move on- the memories will linger but your brother is in a better place.

I have lost my nephew on the same Nov 13 last year after he got electrocuted by the exposed home iron wire. It came as a shock to the family and I was there to do resusitation but he was gone.....


Life must move on. You must take care of your health first and be positive- first drop the weight and walk and walk and walk.....for exercise or get hooked on to the nearby gym. you are a valuble son to your brothers and sister too.

A shining example of a true Malaysian? Yes. Never met him but it appears Chinna touched many lives. Rest in peace, Chinna.

This is v.suresh kumar and a member of the Malay mail soccer team as mentioned by the author. I do believe that all of us would have fond memories and really missed a very good friend/brother dearly. Having him around during our days where ever and when ever we travel gives us the extra boost to accomplish our missions.

God bless him and his family.

When we lose someone we love, it seems that time stands still.

And what moves through us is a silence, a quiet sadness, a longing for one more day, one more word, one more touch.

Its difficult to understand why GOD took him away so soon, or why he left before it was his turn.

But its comforting to remember not just that he passed away, but that he lived.

And that his life gave you and your family memories too beautiful to forget.

Your relationship with your brother was special and that is probably why he made such an impact on your memory. By all means go on and have wonderful memories of him but do not blame yourself for whatever happened. You too have to accept that life is not in you hand but in GOD. So dear friend do not blame yourself with "if i did this" and "had i done that".
Although, i knew not of your brother, i sense he is a gem of a guy. The bit about his reasons for fasting is simply inspiring. Let that value of your late brother inspire you to do the same..so you too can reduce your weight. PS. I enjoy reading your postings. They are insightful.
Jane Raibooke

The article depicts that you are a great brother to him.

For the Game. For the World.

bos, i could still remember ur sadness, etc on the day of ur brother's funeral.. i was there... and very touching piece.. god bless him....

I will never forget this day. Jay jay saw us the day before the accident.he was talking and joking with us.when he left amd waved goodbye little did we know it was the last time we will see him.we miss him and still think of him.i remember how jovial,fun loving he was...he was very good to all of us.

the feeling of losing a sibling is just..well cannot be described but i felt what you felt when shanta passed away.

God will help us gain strenght..and move on.....you have been a well loved cousin,sibling and son.