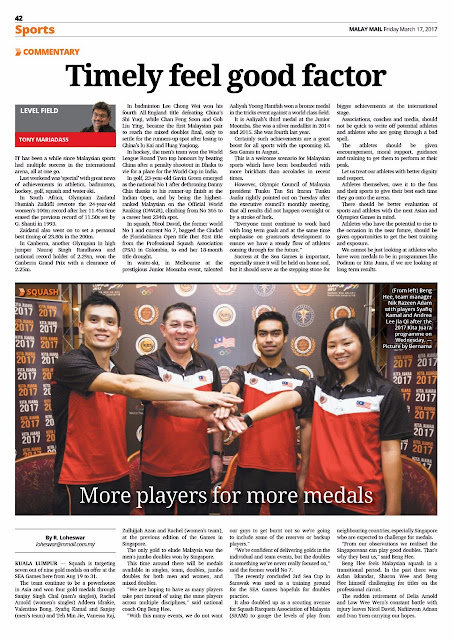 IT has been a while since Malaysian sports had multiple success in the international arena, all at one go.

Zaidatul also went on to set a personal best timing of 23.80s in the 200m.
In Canberra, another Olympian, high jumper Nauraj Singh Randhawa, national record holder (2.29m) won the Canberra Grand Prix with a clearance of 2.25m.

In golf, 23-year-old Gavin Kyle Green has emerged as the national No 1 dethroning Danny Chia after his runner-up finish at the Indian Open and also the highest-ranked Malaysian on the Official World Ranking (OWGR), climbing from No 365 to a career best of 234.

In squash, Nicol David the former world No 1 currently No 7, bagged the Ciudad de Floridablanca Open title (her 81st title from the Professional Squash Association –PSA) in Colombia, to end her 18-month title drought.

In water-ski, in Melbourne at the prestigious Junior Moomba at the Yarra River, talented Aaliyah Yoong Hanifah won a bronze medal in the tricks event against a world class field.

Reigning world champion Anna Gay of the United States topped the competition with 10,220 while Canada’s Neilly Ross, the world meet runner-up was second with 8,450.

With Anna ineligible next year and Neilly turning 17 next year, Aaliyah’s turn to win the Junior Moomba is surely not far from now.

She has another four more Junior Moomba to compete in.

Certainly achievements which is a great boost for all sports and a shot in the arm with the KL Sea Games in August.

Indeed, a welcome scenario for Malaysian sports which have been bombarded with more brickbats than accolades in recent times.

However, Olympic Council of Malaysia president, Tunku Tan Sri Imran Tunaku Jaafar, rightly pointed out on Tuesday after the Council’s executive monthly meeting, that all results did not happen overnight or by a stroke of luck.

“It is indeed a grand week for Malaysian sports with so many remarkable achievements from several sports all at the same time,” he said.

“It certainly augurs well for the future of Malaysia sports and other sports associations should take the cue to emulate the success of these successful associations.

“It must be underlined that the success did not derive from thin air. Both athletes and association had put in lot of work to achieve the results.”

However, Tunku Imran cautioned NSAs and athletes not to rest on the laurels and be satisfied with initial success.

“Everyone must continue to work hard with long term goals and at the same time emphasis on grassroots development to ensure we have a steady flow athletes coming through for the future.”

Indeed a timely reminder because it has become a habit to bloat over any little success and soon lose focus and the ultimate goal.

Yes, all associations and athletes who have brought success over the weekend should be applauded and given a pat on the back without e going overbroad.

All have to view and analyse the success in the right perspective.

Success at the Sea Games is important especially since it is held on home soil, but it should serve as the stepping block for bigger achievement at the international arena.

We cannot be just contended with emerging overall champions at the KL Games.

For instance, Chong Wei has a mission to win the World Championship title for the first time, the hockey team has to qualify for the World Cup, the athletes should be looking at excelling at the Asian Track and Field championship, Gavin should continue to soar to greater heights, Nicol should strive to use her victory to beat higher ranked opponents, while teenage skiing sensation should aim for the sky.

But at the same time, both associations, coaches and media, should not be quick to write off potential athletes and athletes who are going through a bad spell.

It is never rosy when one is at the top or having achieved results. There will be many challenges, temptations and many a hurdle to clear.

The athletes should be given encouragement, moral support, expert guidance and training to get them to perform at their peak.

Take for example Olympian divers Pandelela Rinong and Nur Dhabitah Sabri who are going through some bad spell and fighting hard to bounce back.

There are already critics and on the verge to write them off.

It was the same with Nicol, but her steely character has seen her bounce back.

Both Nicol and Chong Wei were questioned if they were going to retire.
,
Today, as they have gone on to win titles, everyone is singing praises.

Let us treat our athletes with better dignity and respect.

We all want to see our Malaysian sportsmen and women achieve the best results, but let us support them in good times and bad times.

After all they are human.

Athletes themselves, owe it to the Malaysian fans and their sports to give their best each time they go onto the arena and not short change them.

Sport governors too should be fair to sports associations and athletes.

There should be better evaluation of sports and athletes with the next Asian and Olympics Games in mind.

Athletes who have the potential to rise to the occasion in two or four years or even beyond, should be given opportunities to get the best training facilities, coaching and exposure.

We cannot be just looking at athletes who have won medals to be in programmes like the Podium or Kita Juara, if we are looking at long term results.

It is really puzzling that Malaysian hockey which is world class ranked team and have a proven track record, is not in the Podium programme.

Let us all use last week’s achievements by several sports as a further launching pad to further excellence and putting Malaysia among the nations to be noted in the Asian and world sporting map.

TONY is a sports
journalist with close to
four decades’ experience
and is passionate about
local sports.
He can be reached at
tmariadass@gmail.com
Posted by tony mariadass at 9:41 AM