MOA ON THE RISE 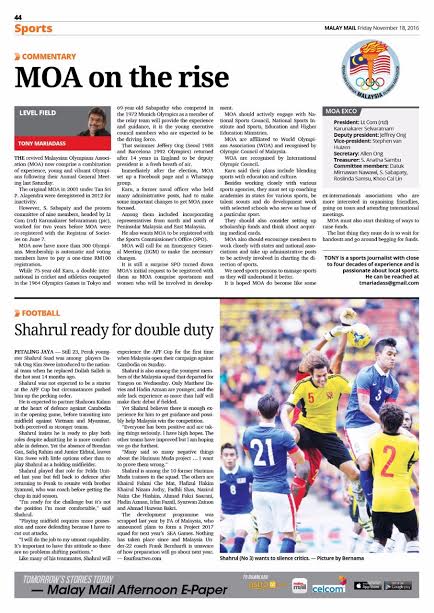 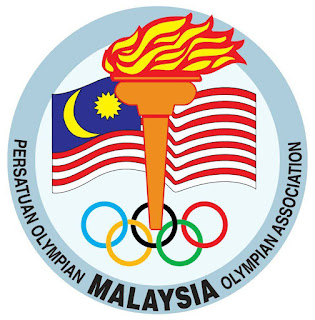 THE revived Malaysian Olympians Association (MOA) now comprise a combination of experience, young and vibrant Olympians following their Annual General Meeting last Saturday.
The original MOA in 2001 under Tan Sri P. Alagendra were deregistered in 2012 for inactivity.
However, S. Sabapaty and the protem committee of nine members, headed by Lt Com (rtd) Karunakarer Selvaratnam, worked for two years before MOA were re-registered with the Registrar of Societies on June 7.
MOA now have more than 300 Olympians. Membership is automatic and voting members have to pay a one-time RM100 registration. 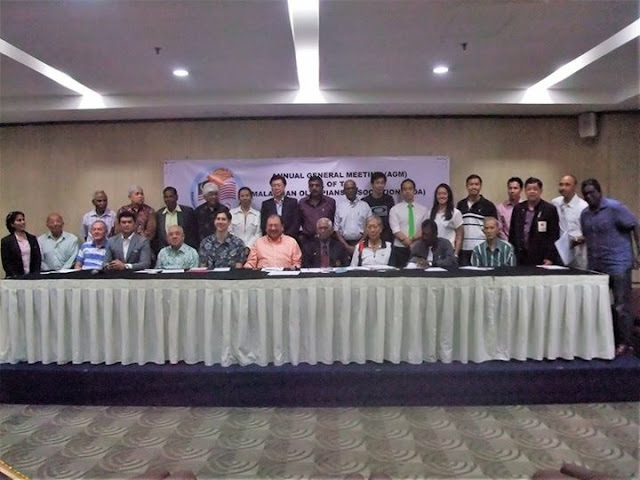 While 75-year-old Karu, a double international in cricket and athletics competed in the 1964 Olympics Games in Tokyo and 69-year-old Sabapathy who competed in the 1972 Munich Olympics as a member of the relay team will provide the experience and guidance, it is the young executive council members who are expected to be the driving force.
That swimmer Jeffery Ong (Seoul 1988 and Barcelona 1992 Olympics) returned after 14 years in England to be deputy president is a fresh breath of air.
Together with others like Stephen van Huizen, S. Aanantha Sambu, Datuk Mirnawan Nawawi (hockey), Norseela Mohd Khalid, Roslinda Samsu (athletics), Allen Ong and Khoo Cai Lin (swimming), this committee has visions to help Malaysian sports with their experience, programmes, input and getting involved in sports administration more actively. 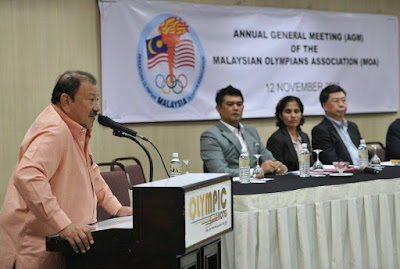 Immediately after the election, MOA set up a Facebook page and a Whatsapp group. 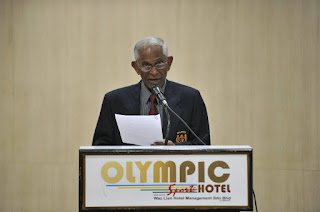 Karu, a former naval officer who held many administrative posts, had to make some important changes to get MOA more focused.
Among them included incorporating representatives from north and south of Peninsular Malaysia and East Malaysia.
MOA too needs to transfer their registration from ROS to the Sports Commissioner’s Office (SPO).
It is still a surprise SPO turned down MOA’s initial request to be registered with them as MOA comprise sportsmen and women who will be involved
in development.
MOA will need to call for an Emergency General Meeting (EGM) to make the necessary changes
MOA should actively engage with National Sports Council, National Sports Institute and Sports, Education and Higher Education Ministries.
MOA are affiliated to World Olympians Association (WOA) and recognised by Olympic Council of Malaysia.
WOA are recognised by International Olympic Council.
Karu said their plans include blending sports with education and culture.
Besides working closely with various sports agencies, they must set up coaching academies in states for various sports, be talent scouts and do development work with selected schools who serve as base of a particular sport.
They should also consider setting up scholarship funds and think about acquiring medical cards.
MOA also should encourage members to work closely with states and national associations and take up administrative posts to be actively involved in charting the direction of sports.
We need sports persons to manage sports as they will understand it better.
It is hoped MOA do become like some ex-internationals associations who are more interested in organising friendlies, going on tours and attending international meetings.
MOA must also start thinking of ways to raise funds.
The last thing they must do is to wait for handouts and go around begging for funds.

TONY is a sports
journalist close to
four decades of experience
and is passionate about
local sports.
He can be reached at
tmariadass@gmail.com
Posted by tony mariadass at 8:36 AM