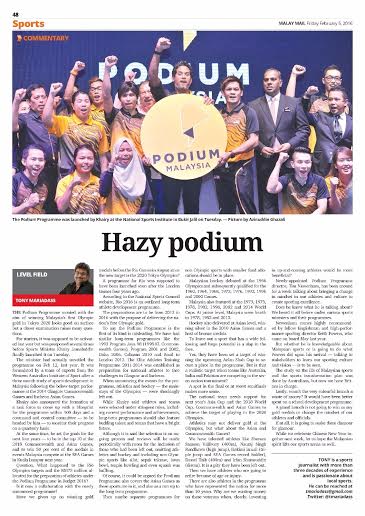 The Podium Programme mooted with the aim of winning Malaysia’s first-ever Olympic gold in Tokyo in 2020 looks good on the surface but a closer examination raises many questions about it.
For starters, the programme was supposed to have got off the ground last year but was postponed several times before Youth and Sports Minister Khairy Jamaluddin finally launched it on Tuesday.
The minister had actually unveiled the Podium Programme on 12th February last year. It was formulated by a team of experts from the Western Australian Institute of Sport after a three-month intensive study of sports development in Malaysia following the below-target performance of the Malaysian contingents at the Glasgow XX Commonwealth Games and the Incheon 17th Asian Games in 2014.
Khairy had also announced the formation of a task force to come up with a blueprint for the overall programme within 100 days, and a Command and Control Committee, to be headed by him, to monitor the progress of every party on a quarterly basis.
At the same time, he set the goals for the next four years: to be in the top 10 at the 2018 Commonwealth Games and 2018 Asian Games, and to win 50% of the medals in all the events that Malaysia competes in at the 29th SEA Games, which will be hosted by Malaysia in 2017.

Question. What happened to the Rio Olympics targets and the RM75 million allocated for the preparation of athletes under the Podium Programme in Budget 2016?

Is it now a collaboration with the newly announced programme?

Have we given up on winning gold medals even before the Games start in August since the new target is the 2020 Tokyo Olympics?

In any case, a programme for the Rio Games was supposed to have been launched soon after the London Games four years ago.

According to the National Sports Council website, Rio 2016 is an outlined long-term athlete development programme towards the XXXI Rio Olympics 2016. The preparations are to be for four years from 2013 to 2016. The purpose of the programme is to deliver the first-ever Olympic gold for the nation.
To say that the Podium Programme is the first of its kind is misleading. We have had similar long-term programmes, like the 1993 Program Jaya 98 (1998 KL Commonwealth Games), followed by Program 2001 and 2002, Doha 2006, Cabaran 2010, Road To London 2012 and Elite Athletes Training Programme 2011-2014 established as a preparation programme for the national athletes to face challenges in the XX Commonwealth Games in Glasgow, Scotland, and XVII Asian Games in Incheon, South Korea in 2014.
When announcing the events for the programme on Tuesday, athletics and hockey – the main stayers of the Olympics – were shockingly left out.
While Khairy had said the current athletes and teams were selected under stringent rules, including current performance and achievements, long-term programmes should also feature budding talents and teams that have a bright future.
Although it is said that the selection is an ongoing process and reviews will be made periodically with room for the inclusion of those who had been left out, leaving out athletics and hockey and including non-Olympic sport like silat, sepak takraw, lawn bowl, tenpin bowling and even squash, for the matter, was baffling.
Of course, it will be argued that the Prodium Programme also covers the Asian Games as these sports are competed in it, and also as a run-up to the long-term programme. Then maybe separate programmes for non-Olympic sport with smaller fund allocations should be in place.
Hockey has featured in the Olympics since 1956, when the Malaysian team made their debut and went on to compete in its 1960, 1964, 1968, 1972, 1976, 1992, 1996 and 2000 editions.

The sport also featured in the 1973, 1975, 1978, 1982, 1998, 2002 and 2014 World Cups and at the junior level, the Malaysian team were placed 4th in the 1978, 1982 and 2013 editions. Hockey also delivered at Asian level, winning the silver in the 2010 Asian Games and a host of bronze medals in regional games.
To leave out a sport that has been a tradition and which has a wide following and huge potential is indeed a slap in the face of the fraternity.
Yes, they have been set a target to finish in the top in the upcoming Azlan Shah Cup to secure a place in the programme. But is that a realistic target when teams like Australia, India and Pakistan are competing in the seven-nation tournament?
A spot in the final or at worst semifinals makes more sense.
The national hockey team need support for their campaign for the 2017 Asia Cup, 2018 World Cup, Asian Games and Commonwealth Games in order to achieve the target of playing in the 2020 Olympics.
As for athletics, it may not deliver a gold at the Olympics, but what about the Asian and Commonwealth Games? We have talented athletes like Shereen Samson Vallbuoy (400m), Nauraj Singh Randhawa (high jump), Muhammad Hakimi Ismail (triple jump and Sea Games record holder), Russel Taib (400m) and Muhammad Irfan Shamsuddin (discus). It is indeed a pity that they have been left out.
Then we have athletes named in the programme who have clearly stated that they are going to retire soon because of age or injury. There are also athletes in the programme who have represented the nation for more than ten years. Why are we wasting money on these veterans when, clearly, investing in up-and-coming athletes would be more beneficial?
Newly appointed Podium Programme director, Tim Newenham, has been around for a week, talking about bringing about a mindset change in the athletes and in our culture in order to create sporting excellence. Does he know what he is talking about? Tell us something new. We have heard it all before under various sports ministers and their programmes.

Newenham comes highly recommended by fellow Englishman and high-performance sporting director Keith Powers, who came on board in May last year.

But whether he is knowledgeable about Malaysian sports or is going to do what Powers did upon his arrival - that he was going to talk to all the stakeholders to learn our sporting culture and vision - is left to be seen.
The study on the ills of Malaysian sports and the sports transformation plan was done by Australians but now we have the British steering the programme.
Lastly, wasn't the very colourful launch of the programme on Tuesday a sheer waste of money? The money would have been better spent on a school development programme.
A grand launch is not going to win us any gold medals or change the mindset of our athletes and officials.
If at all, it is going to make them clamour for glamour rather than performance.
While we celebrate Chinese New Year together next week, let us hope that the Malaysian spirit lifts up our sports arena as well.
TONY is a sports
journalist with more than
three decades of experience
and is passionate about
local sports.
He can be reached at
tmariadass@gmail.com
Twitter: @tmariadass​​​
Posted by tony mariadass at 6:05 AM