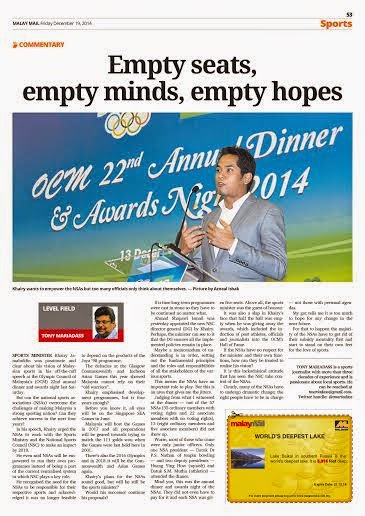 SPORTS MINISTER Khairy Jamaluddin was passionate and clear about his vision of Malaysian sports in his off -the-cuff speech at the Olympic Council of Malaysia’s (OCM) 22nd annual dinner and awards night last Saturday.

But can the national sports associations (NSAs) overcome the challenges of making Malaysia a strong sporting nation? Can they achieve success in the next four years?

In his speech, Khairy urged the NSAs to work with the Sports Ministry and the National Sports Council (NSC) to make an impact by 2018.

He even said NSAs will be empowered to run their own programmes instead of being a part of the current centralised system in which NSC plays a key role.

He recognised the need for the NSAs to be responsible for their respective sports and acknowledged it was no longer feasible to depend on the products of the Jaya ‘98 programme.

The debacles at the Glasgow Commonwealth and Incheon Asian Games this year showed Malaysia cannot rely on their “old warriors”.

Before you know it, all eyes will be on the Singapore SEA Games in June.

Malaysia will host the Games in 2017 and all preparations will be geared towards trying to match the 111 golds won when the Games were last held here in 2001.

There’s also the 2016 Olympics and in 2018 it will be the Commonwealth and Asian Games again.

Khairy’s plans for the NSAs sound good, but will he still be the sports minister?

Khairy wants to empower the NSAs but too many offi cials only think about themselves. — Picture by Azneal Ishak

Would his successor continue his proposals?

It is time long-term programmes were cast in stone so they have to be continued no matter what.

Perhaps, the minister can see to it that the DG ensures all the implemented policies remain in place.

Maybe a memorandum of understanding is in order, setting out the fundamental principles and the roles and responsibilities of all the stakeholders of the various sports. This means the NSAs have an important role to play. But this is an area that gives me the jitters.

Worse, most of those who came were only junior officers. Only one NSA president — Datuk Dr P.S. Nathan of tenpin bowling — and two deputy presidents — Huang Ying How (squash) and Datuk S.M. Muthu (athletics) — attended the dinner.

Mind you, this was the annual dinner and awards night of the NSAs. They did not even have to pay for it and each NSA was given five seats. Above all, the sports minister was the guest of honour.

It was also a slap in Khairy’s face that half the hall was empty when he was giving away the awards, which included the induction of past athletes, officials and journalists into the OCM’s Hall of Fame.

If the NSAs have no respect for the minister and their own functions, how can they be trusted to realise his vision?

It is this lackadaisical attitude that has seen the NSC take control of the NSAs.

Clearly, many of the NSAs have to undergo dramatic change; the right people have to be in charge — not those with personal agendas.

My gut tells me it is too much to hope for any change in the near future.

For that to happen the majority of the NSAs have to get rid of their subsidy mentality first and start to stand on their own feet for the love of sports.